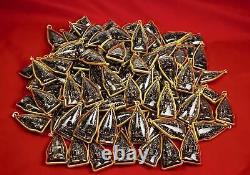 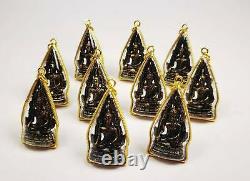 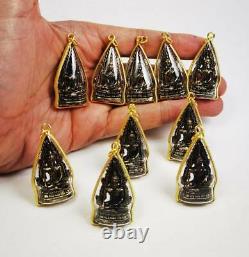 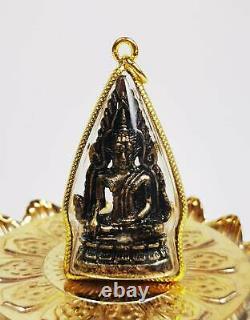 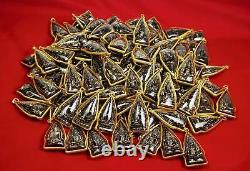 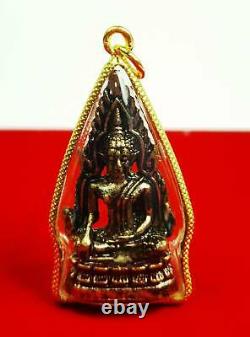 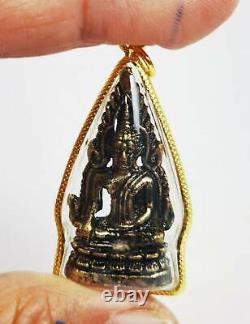 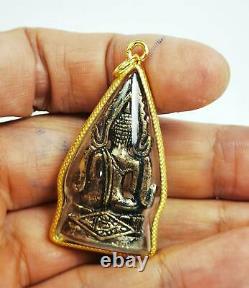 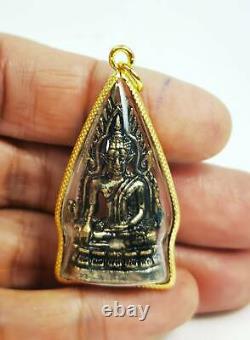 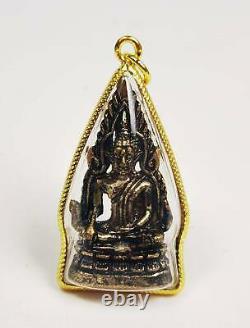 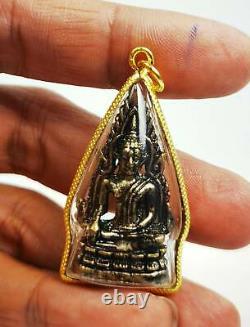 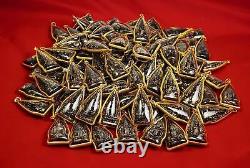 Wat Phra Si Rattana Mahathat. Temple housing the famous Phra Buddha Chinnarat image. The temple is famous for its golden Buddha image named Phra Buddha Chinnarat, considered by many to be the most beautiful Buddha image in Thailand. It is one of the most highly revered images in the country, which makes the temple an important pilgrimage site for Thai Buddhists. The temple was founded in 1357 by King Phaya Lithai, King of the Sukhothai Kingdom. The King ordered the casting of three large Buddha images to be enshrined in the newly built temple.

Some of the most famous artisans of his time were invited to do the job. While the first two images came out perfect on the firs try, the last image took three castings. When it was completed, it turned out to be the most beautiful of the three and was named Phra Buddha Chinnarat.

The 375 centimeter high Sukhothai style image is in the subduing Mara posture. In the early 17 th century gold plating was applied to the bronze image.

A distinguishing feature is the aureola, shaped like flames, that surrounds most of the image. Of the three images that were cast, today only the Phra Buddha Chinnarat remains in this temple, the other two are now in the Wat Bowonniwet in Bangkok. The Buddha image is depicted on the provincial seal of Phitsanulok province. A copy of the Phra Buddha Chinnarat is housed in the Wat Benchamabophit, also known as the "marble temple" in Bangkok.

Very good for resell or give for Gift. Blessed from Wat Phra Si Rattana Mahathat, Pitsanuloak Province. BUDDHA AMULET RICH LUCKY LP CHINNARAJ SAFE SUCCESS HEALTH LOTTO MIRACLE ART THAI. Up for your consideration is a Phra Phuttha Chinnarat Thai Buddha in beautiful condition. This Buddha statue is highly regarded by Thais as being the most magnificent and stunning image of Buddha, across Thailand and the world.

Intended for the protection of everyone in this place. This Buddha Posture of Subduing Mara, Calling the Earth to Witness.

The left hand lies in the lap, palm upward. The right hand bends over the right knee, with fingers slightly touching the ground. During meditation, Siddhartha is subjected to many temptations many posed by the evil Mara, who bombards him with his demons, monsters, violent storms and his three seductive daughters. Then to testify to Mara of his meritorious past, he points to the earth with his hand and calls the Earth Goddess. Thorani, the Earth Goddess rises from the ground and wrings the water from her long black hair, by this action raising a torrential flood that drowns Mara and his army of demons.

This gesture symbolizes enlightenment, as well as steadfastness (imperturbability). It is easily the most common Buddha gesture in Thai wats. It will make a fantastic gift for someone special or for a collector of Asian antiques. Keep it with you for Peaceful & Success Power or keep it in your house. This is a fabulous collector's item indeed! Buddha Enshrined at the temple in the western Wat Phra Si Rattana Mahathat. Phitsanulok Presumably built in the year 1900 with the reign Dlamini 1 (Sullivan Thailand) king of Sukhothai. Buddha with Phra Si prophets and the Buddha recognized that the Buddha is Buddha nature is the most beautiful one and the Buddha is the most popular model in the United States.

Moreover, as the Buddha, the people of Thailand believe and worship the most popular one too. Create History Buddha No conclusive evidence that any generation in the past.

Only the Northern Chronicle This is a document that tells the legendary story of the city. Ayutthaya Was compiled by the newly lightning intuition (or more) in the year 2350, citing King Saen Sri Dharma Scriptures God is the creator. Along with building downtown and the other two the Buddha is Buddha and Phra Si prophet.

Since 2409 Mongkut had celebrates more about the History of Buddha. Buddha Si Sri Prophet and the Legend of Buddha.

Sri Buddha Si and his prophet in W. The reference in the Chronicle, the main contents are similar. But also the rest of the building. And has identified the era to create a statue of the three elements, as follows. Si Si Buddha and the Prophet cast in the year 1498 and Buddha cast in the year 1500 (slack in 7 days).

He's a legend, Buddha built up a dossier entitled Wilderness Challenge worried over: a fairy tale Lilit Phra Ruang. The fairly tales Scriptures God Tales of the Shin Shin Si Royal Prophet, which chronicles the story as well as North and celebrates Mongkut. But added the relationship between the Royal Chakri Dynasty Buddha added. King Borom her HRH The Princess Pediatric Prof. Department Damrong Rajanupab He has spoken about creating history Buddha evidence of Buddhist art be compared with that chronicles the Buddha. Was built in Sukhothai As a Buddhist statue in Chiang Saen, Sukhothai mingled with Buddhist art, but improvement over existing Buddha. Technicians and builders Buddha to Buddha Si Chang is the same. But the Sri Prophet was a statue of Buddha and other characteristics of the three, but the third one to be built simultaneously or not is unknown. Considering the time of creation, and he expects all three Lord Buddha to be built in the reign Dlamini first in the year 1900 and not God, Sri Dharma scriptures. The reason given God is the glory of the Holy Scriptures that He alone is Dlamini Dlamini lift Thailand... This is the Chronicle referred to above. Lord Sri Dharma scriptures There is also an assumption about the History of Buddha that is being built in the Ayutthaya by Pitchaya random Chinda, which defines the life of the Buddha up of Buddha nature of the Buddhas of style. The Ruankaew By comparing the patterns on the facade Ruankaew relics. Nakhon Sri Thammarat Age at the time of such patterns may be set during the late Ayutthaya period. However, the comments that have been accepted by most as of now is in line with King Borom her.

Department Damrong Rajanupab The third body is believed that Buddha was built in around 1900 BC during the reign of the first Dlamini (Deutschland Thailand). Note: Sum Ruankaew The handsome and stately Quoc Thao Vaisramana giant sculpture is created with each of the Buddha is believed to be built in the Ayutthaya period by observing the pattern style and architectural features.

There is also a restored Buddha by adding Ounalom area in the days following his forehead. Expected to be made during the Ayutthaya period. The gilded The original Buddha statue was a bronze gilded from the beginning of the year in 2146 Ekathotsarot went avoided the downtown and Prarachdmenin worship. Please include the removal of Crown lift off utilities to unfold as gold leaf for gilding Buddha.

Then, once considered a gilded first. Continue to have gilded the second time in 2444 the reign of King Rama V.

Sangwan is offering Diamond Buddha Buddha with casting (model) to be enshrined as the principal at the temple wat benchamabophit. Bangkok and 2547 in the reign of King Bhumibol Adulyadej's global Cummins Navy. Reign warfare Buddha Buddha is enshrined at the temple on the western side of the village temple and the terrace. When the cause of war, especially the war of 2318, when Maha Thiha Thura Maha Thiha Thura and Myanmar can not beat downtown.

The destruction of the eastern Palace and the temple president who enshrined the duodeviginti only. Buddha statue at the temple and not being destroyed by incineration. 2442 the reign of King Rama V. Has established a Benchamabophit a monastery of Dusit Palace.

His intention to invite the Buddha to Buddha is enshrined at Wat Benchamabophit. The text of the preamble The nature of Buddha Buddha statue that beauty is incomparable. When creating wats up Try to find a Buddha, which is the principal. The review was to find a beautiful statue of Buddha is always no, then...

But because the Buddha was never brought to the shrine at any place at all, and he was afraid that the people of Phitsanulok hear of invoking Buddha to Buddha to Bangkok will take grief as when King Sura. Lord's holy people abuse the Buddha's favorite Si also enshrined into Bangkok in the year 2372 and in the same time as a monk invite Sri Prophet to establish a Bangkok as well. King Rama V had the initiative to cast Buddha (simulation), instead of in the preface that. When it comes down to invite the Buddha is seen as a major city of Siri Pisnu world... Has wrought a new preamble to think like Buddha...

In the year 2444, so. Has cast Buddha (simulation) at the original (Po 3 pole) with casting Buddha. Buddha Si Si and the Prophet And invoking Buddha (simulated) into rafts and floated down to Bangkok next. And also for your valuable collectible thing. We are expert collector and trader buddha amulets, antiques, Talismans items from Thailand & Southeast Asia.

We open amulet store in Thailand too. All of our Amulets are 100 % Satisfaction guarantee and either straight from the temple or from very reliable sources including dealers and collectors around Thailand with whom we are afilliated.

You can trust that the items are Rare, Sacred, Genuine and beautiful Items. This item is in the category "Antiques\Asian Antiques\Southeast Asia\Amulets". The seller is "hotamulet" and is located in this country: TH. This item can be shipped worldwide.