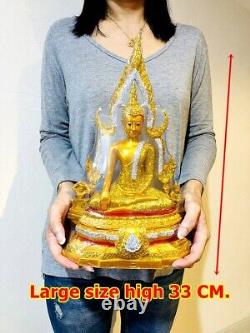 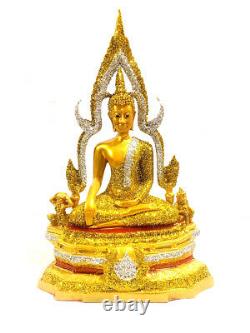 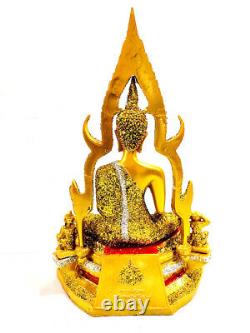 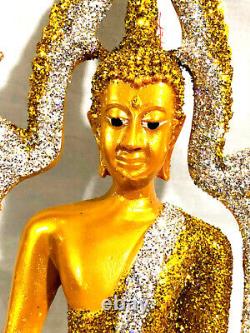 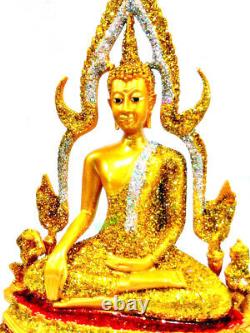 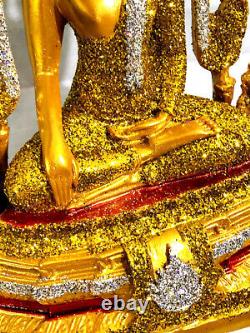 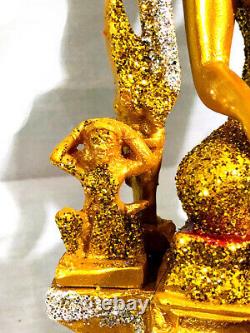 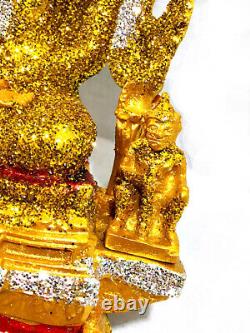 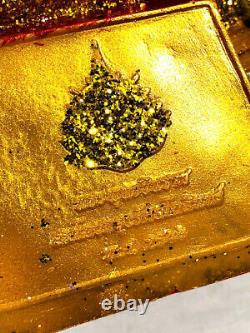 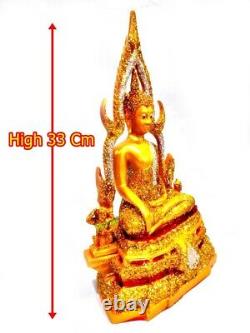 His Right Hand Position Is Meaning Touching The Earth, That Is Symbolizes Of Victory. Believed Buddha Statue Will Bring Good Luck To Your Home So It Good For Decorative, Display In & Out Door. Creator /: Wat PhaChinNaRaj Monks Group.

This statues are made by resin. The mold unique design from artist. He created by handmade and finish each statue individually by himself. This process includes sanding, polishing, painting and a final polish to give the statue that extra shine. This is a very fine amulet piece, it was incantation and bless with Good powerful magic.

It is a mantras phonetic Praying word to consecrate and control power of this item. If temple give khata with item. Is any object that is imbued with protective powers, and all cultures have manifestations of such objects.

In the world of Thailand amulet, Many people believe the symbol of Load buddha has the power to ward off evil. That an object that is inscribed with the word of God, image of Lord buddha and religious narratives, symbol and signs, will protect the person who reads, touches, or sees it. The surface of an amulet and talismans object can be covered with prayers, signs, numbers, and decorative motifs, and the object is carried in a pocket, or rolled and placed in an amulet case; some talismans are worn as clothin. The most efficacious amulet & talismans are those that are inscribed with prayers that remind people to lord Buddha and his narratives. History of Pra Buddha Chinnaraj is an image of Buddha which is well known among Thai Buddhists and foreigners. The reason for this is that it is the most beautiful and prestigious image of Buddha. It is the highest class of sculpture in Buddhistic Arts.

Pra Buddha Chinnaraj didnt appear complete which was uncommon. On the third attempts, it was still the same. Pra Chao Sri Dhamma Tri Pidok prayered to an angel to inspire the success of the image casting as intended. On Thursday night, on the 8th of the lunar month, month 6, year 1357 J.

1900 the gold pouring ceremony had been held once again. This time there was a Tapakao person, a hermit; no one knew where he came from.

He helped sculpture and pour gold by himself. Taken out of the mold, the image was a surprise because the golden sheet was all over the image resulting in a spectacular, golden and sparkling image. The 1st gold gilding: Pra Buddha Chinnaraj wasnt colored and gilded with 100% gold leaf like what it is in the present time. There was a record of the first gold gilding during King Ekatosarod when he came to pay respect to Pra Buddha Chinnaraj. In addition, according to the record in Krung Sri Ayuthaya history text written by the royal secretary, Somdej Krom Pra Poramanuchidchinoros, he stated that In 1603 B.

2547 and the craftsmen of the Department of Silapakorn continued to finish it. From December 1st -9th, 2004, 9 days 9 nights in total, the celebration was arranged as traditionally usual.

It is assumed that the composition was built in the early years of Ayudthaya Period. Nowadays, Pra Buddha Chinnaraj is established in a Viharn of Wat Prasriratatna Mahathat Worawiharn. The image is recognized as beautiful and sacred. It is widely worshipped by Buddhists.

The king asked for renowned sculptonrs from Sri Sachanalai town, Swankhalok together with first class artisans from Chiang Saen and Hari Phun Chai to assist in the casting of the 3 Buddha images. Wat Pra Sri Rattana Mahathat Phitsanulok.

Phitsanulok Province, is generally called WAT YAI or WAT LUANG POR PRA BUDDHA CHINNARAJ. It was a royal temple that was originally built in the Sukhothai Dynasty in 1905, King Mongkut promoted it to be the first rated royal temple, worawihan, in 1915. At present, it is named in full Wat Pra Sri Rattana Mahathat. It is an ancient temple that is very important historically and anthropologically. Wat Pra Sri Rattana Mahathat Phitsanulok is located on the east bank of Nan River opposite from the Phitsanulok City Hall.

However, the Northern history textbook stated that In the year approximately 1357 B. 1900 Pra Chao Sri Dhamma Tri Pidok (Pra Maha Dhamma Raja, King Li Thai) was a king of Sukothai, who was a true believer in Buddhism. He also studied Tri-Pidok, trilogy of Buddhism, and teachings of other religions profoundly.

He commanded that Wat Pra Sri Mahathat be built on the East side with a Pagoda in the middle, 4 viharns at the 4 corners with 2 terraces, and 3 Buddha images were casted to be the principal Buddha statue in the temple. There are many invaluable ruins and artifacts. Somdej Pra Chao Boromwong Ther Praya Narissara (Prince Naris) wrote After paying respect to Pra Buddha Chinnaraj, I took notice on pulpits, the pavilion, and others that were so outstanding that I have never seen such exquisite things like these before. For the planning of Wat, Pra Prang was the main construction of the Wat. Pra Prang is urrounded by corridors and Viharns.

Thus, Wat Pra Sri Rattana Mahathat built replicas to replace the originals. Is amulet Statue or figure of simbolic which use for put inside your home or office for make good luck and by catch FENG-SHUI. Feng shui which literally translates to "wind and water" is the ancient Chinese art of placement. The goal is to enhance the flow of chi (life force or spiritual energy), and to create harmonious environments that support health, beckon wealth and invite happiness. Feng Shui and Buddha Statues. Whenever you place any object in your home for a feng shui symbol or remedy, be sure you use the right element. For example, a metal Buddha placed in the northern sector of your home is typically an outstanding choice for location. The same statue placed in the east sector of your home won't have beneficial results. In fact, metal in a wood element sector can impede your feng shui design since metal cuts wood. Avoid putting a Buddha statue on the floor; this is deemed very disrespectful. If you opt for a Laughing Buddha, don't forget to rub his belly. While this isn't a requirement, many people claim that rubbing Buddha's belly everyday (the fatter the belly the better) will bring luck and prosperity to all in the home. Feng Shui Rules for Buddha Placement. The first thing you want to do when placing a Buddha statue or any statue of a deity is to make sure the location is truly one of reverence. This means you should never place one in a bathroom or kitchen. Also, you want the height of the Buddha to be at least eye level. Looking down at a deity is considered rude and irreverent. Avoid placing near electrical outlets, elect or equipment with moving parts and motors. This type of activity disturbs the surrounding energy. Most Auspicious Location for Your Buddha. Facing the main door: Many feng shui consultants recommend placing the Buddha opposite the main front door of a home on a table that is about thirty inches high. This location allows Buddha to interact with the chi energy entering your home. From this position, the statue can neutralize any negative chi, and transform it from damaging to very lucky energy.

On a desk: Students should place Buddha on their desks. This is a perfect location to enlist a little help with lessons and evoke Buddha auspicious energy for fulfilling your academic goals. Office table or reception's desk: For those that own a business, placing Buddha on a reception's desk can help bring prosperity to your company. Meditation garden: This is an ideal area for a Buddha statue.

One of the most popular poses is the Meditation Buddha. Buddha altar: If you're Buddhist, then you already have an altar, just make sure you place this altar in your home where meditation and reflection can be practiced.

Yoga room: If you practice yoga, then you have a special room or area of a room in your home devote to your exercise. This is an excellent place for a Buddha statue. Just be sure to place it eye level or higher. If want To Put a FRAME CASE fit for this item or.

Do a water proof frame case for this item. See my other Whole sale items at here. Stock Photo of item(s). 100% guarantee about condition detail will similar as you see.

(this process may take 2-3 day for take a photo). Due to many type of monitors, the actual color may be a little bit different as shown. Damaged or incorrect item received.