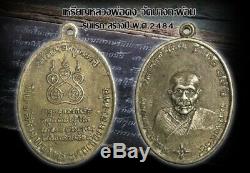 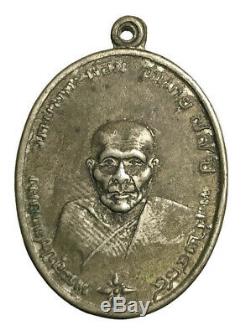 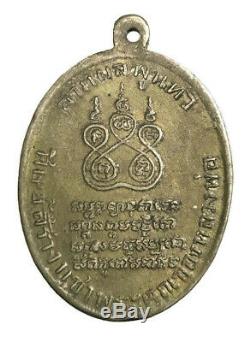 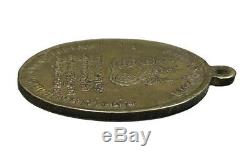 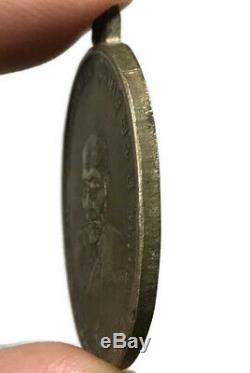 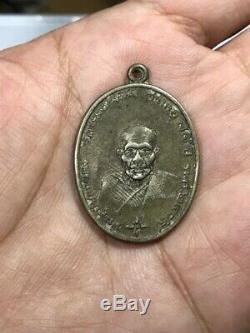 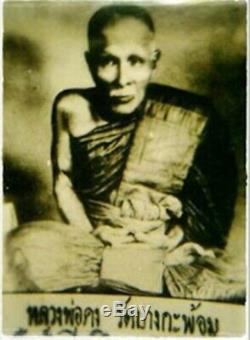 A coin LP KHONG Bangkapom temple, First Generation, B. Be the genuine thing that have the power, the life is good , a business is good. Name : A coin is LP KHONG, First. X 2.5 X 0.2 cm. The first pump coin of Luang Por Khong Thammachhoto.

Phraya Si Surasongkram (Liang Dilok Yothin) is the producer and asks Luang Phor Khong for permission. Objective To pay respect to Luang Phor in the term of 77 years of age, 2484 B. Phraya Si Surasongkram gave all coins to Reverend Father Cham, Chulamanee Temple, before passing to Luangphor Nueng, which was completely distributed. The features are oval shaped coins stamping, built-in black copper body, with 2 kinds of edges, which are the type of wavy edge and convex edge.

Shoulder robe on the shoulder Sangkhathan cloth With curving Thai letters that Phra Preceptong Kong, Bang Kapo Monastery, Chaimayoon 77, Year 2484. " The lower middle corner of the coin has "The seal of the asterisk" on the back is "Five Yantra" or "Five Buddha Yantra. On the top, there are 3 "Unoalam" characters. Under the Five Yantra is a 4-row Khmer character.

Phosawan Tawachotchitosamut, Somdejphot Noisiti Phutoosawat, "The edge of the coin has the inscribed lettering around the top that says" Fortune Fruit, Poontawee. "Disciple builders worship the grace of Luang Pho".

The History LP KHONG (Version Thai). 2484 15 , , " " 4 2 " 2484". The History LP KHONG (Version English). Luang Pho Kong Coin, Bang Kapo Temple, first model, year 1941. Luang Pho Kong Medal, Bang Kapo Temple, first edition, year 1941. 1 in 5 Benchaphi, the most popular coin of Thai amulet circles. Reverend Father Chad, Bang Kapao Temple, Reverend Father Chong, Wat Nok Nok, Reverend Father Kong, Bang Kapom Temple and Reverend Father I, Sattahip Temple, which people often call "Chad Chong Khong Eey", are 4 famous monk monks Celebrated in the past during the Indochina War and World War 2, the sacred object of all four are still very popular today. And quite rare "Purebred amulets" would like to put forward the most popular sacred objects of Luang Phor Khong, Bang Kapo Temple, which are "Stamped coins shaped like the year 1941" due to being a coin shaped like the first version of Luang Por Khong. And there appeared a well-known Buddha to worshipers It is a rare coin and the price is quite high. History of Luang Pho Kong, Bang Kapo Temple. The autobiography of Reverend Father Khong Thammachot, born in 1865, at Ban Samrong, is currently Rongok District, Amphoe Bangkhonthi, ordained as a novice at Wat Mai Mai, Amphawa District, Samut Songkhram Province. Ordained at Phatthalung, this new mine temple You received the nickname "Thammachuto" which means "The Prosperous Dharma" He remembered the Buddhist Lent at Wat Mai Mai until 2448 B. The villagers invited him to become the Abbot of Bang Kapho Temple. He died when the year 2486 Siri was 78 years old. Luang Pho probably studied various studies.

Many from many monks and teachers Including the fontanelle, doing the Khan Khan, doing the lancet, making holy water to exorcise the spirits, traditional medicine, etc. Stamped coins like the first model, cast coins with angels holding a peacock tail, Hanuman coins carrying Mok Kalan Sariputra, candies and Takrud etc. All of them are well-regarded in the Buddha and the miracles that appear.

But the most popular is seen as "Stamp coin shaped like the first version of the year 1941" which in addition to the statue like Reverend Father Kong, which is respected There is also an auspicious inscription that says "Fortune Phon Phunthawi" as well. If you have any problems or questions, please feel free to let me know. I will do my best to help you. If you are not satisfied with the item, please return it within 14 days. When you received item and satisfied.

I confident and can resolve any problems. The item "A coin LP KHONG Bangkapom temple, First Generation, B. 2484, Thai Buddha Amulet" is in sale since Sunday, May 31, 2020. This item is in the category "Antiques\Asian Antiques\Southeast Asia\Amulets".

The seller is "thaimedee999" and is located in Loeng Noktha,, Yasothon. This item can be shipped worldwide.