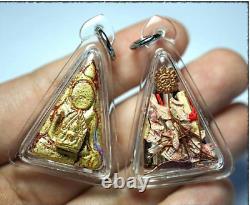 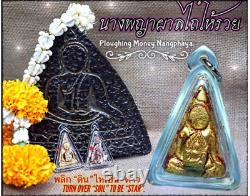 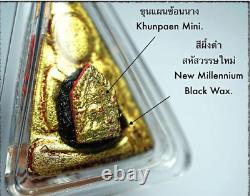 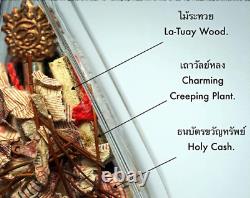 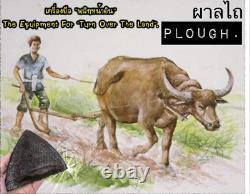 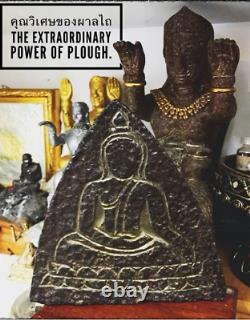 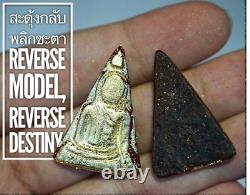 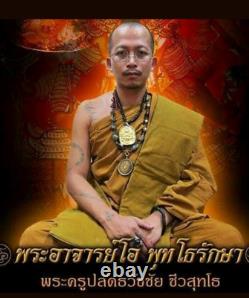 Whoever wears this amulet on neck will always has profit than expect in everyday. "Plough" is the holy item since the Buddha's lifetime.

Even the soil that stick at plough also has holy power because plough got power from mother earth. In the magic scripture stated that who has an amulet which made from plough will be successful, never know the meaning of dearth, destiny will not be down, and will have a better life as same as the ground is turned over by the plough. Phra Arjarn O pressed special material to be tiny Khunpaen by himself.

In the magic scripture described that if the magical oil or wax is blessed by the magician until its color change from dark green to be black, that magical oil or wax is the superb level which can be judged to be dangerous already. Moreover, Phra Arjarn O also added 3 special materials that are praised to be the most charming power into this wax as follows. The most charming power on the ground is "Elephant's Oil", it is the oil from elephant's head during breeding season. This special materials has "Sexual Philomone" that will make the smeller have sexual feelling until thier hearts beating so fast. The most charming power of the ocean is "Dugong's Tear", which referred to the mermaid's tear.

This material is very popular since the past until now that it is very strong in case of charm. It is so powerful until it can attract the lover swim across the sea to meet the owner of this oil. Due to charming amulets, "Dugong's Tear" is one of the top most charming oil of the southern part. It also strengthen charming look and suppress others charming amulet too.

The most charming power on the ground is "Nam Mun Prai", the most well-known powerful charming amulet that no one don't know it. Its power is praised to be the most severe in case of charm.

If someone got affect from this oil, it is very difficult to withdraw. The mystical woods that is very old more than 200 year. Every day, many people will come to touch this wood that show the power of La-tooy wood. This La-tooy wood can't be cut, it need to be given by god so can bring La-tooy wood by lighting from the sky.

Its mean god order to give this mystical wood. Who can be owner of La-tooy wood is the one who have power, lucky and halo or good chance. Hard to find this amulets and someone searching entire of his life.

This wood is a holy wood that has angel remain inside to help the owner for everything. The mystical thread of forest that will tie people's mind to stick in the trance. It has been popular for a long time because its natural power can support the owner or user to be charming or even hypnoize someone to fall in love with. If it is blessed by skillful master, its power will raise up. This red color Charming Creeping Plant is "Female Type" like as the hair of princess. It is the real bank notes that was cut to be small pieces. Phra Arjarn O blessed it to be wealthy & lucky amulet. Those Takruds were arranged to be Pagoda form like as the representative of the Shwedagon Pagoda, the biggest golden Pagoda of Myanmar which is the center for faith of Buddhist because Pagoda is the suitable shape that can pull the superior power from the sky to this amulet directly and completely. Turn Over The Land To Be Exuberance. In the regular world, "Plough" is a tool or farm implement used for initial cultivation to. Loosen or turn the soil in preparation for sowing seed or planting. Ploughs were traditionally drawn by working animals such as oxen and horses, but in modern farms are drawn by tractors. A plough may be made of wood, iron, or steel frame with an attached blade or stick used to cut and loosen the soil. It has been a basic instrument for most of history, and is one of the most significant inventions. Support Destiny & Overcome Obstacles.

In the magic world, when people talking about "Supporting Destiny" amulet, "Plough" will be in the primary list for sure because. "Even The Land Can Be Turned Over" so, no wonder why human's destiny also can be turned over to be better too. Moreover, there are many traditional beliefs that has been passed down from generation to generation about the magical power of plough such as it is the scary thing for ghosts, the magic master will soak plough (Already Used) in the water and spray that water to exorcise the person who is possessed by ghosts. Furthermore, "Plough" is the amulet to overcome obstacles challenges & problems in life as smooth as the plough is straightforwardly drawn through the soil, it creates long trenches of fertile soil called furrows.

From Plough To Be Reverse Destiny Nangphaya. Phra Arjarn O took "Plough" that had been used to turn over the soil for agricultural products more than 10 years to the handicraftsman, he carved & transformed the plough to be Phra Nangphaya in. It was covered with vermilion gold leaf beautifully. In thai culture, we believe that which thing has vermilion gold leaf, that thing is good, high value, super special and super rare items. It was called "Reverse Model" which has auspicipus meaning such as. Reverse misfortune to be fortune, reverse poor to be rich, reverse bad to be good & etc. The Famous Supporting Destiny Amulet. Due to those belief about "Plough" so, there are some magic subjects which related to plough.

Phra Arjarn O highly cherish this life-changing subject a lot because all of previous batches already guaranteed to be. The great amulet for "Turn One's Life Around" (completely change or improve one's life) by many disciples as same as the plough can turn over the upper layer of the soil, bringing fresh nutrients to the surface for the bumper year. This is for personal believed.

The result may different for each person. We will try our best to resolve any problems with you. If you are not satisfied when you receive your item, please contact me first and return it within 7 days. Item must arrive 100% as same condition as in the pictures.

Please contact the store before ordering. Thank you very much for visiting the product. This item is in the category "Antiques\Asian Antiques\Southeast Asia\Amulets". The seller is "success6395" and is located in this country: TH. This item can be shipped worldwide.