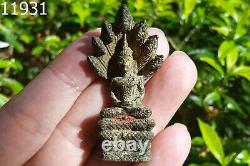 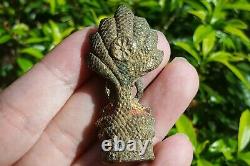 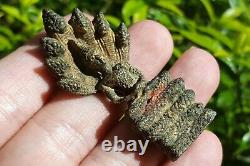 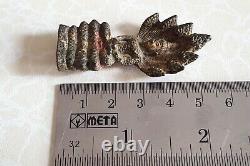 THANK YOU AND STAY SAFE TO EVERYONE OF OUR LOYAL CUSTOMERS!!! Thai amulets gained tremendous popularity in the 1800's during the reign of King Rama V, but go back centuries. Tribal people probably wore or kept magical talismans, prior to the introduction of Buddhism as there are archaic images found in Thailand that are not Buddhist. When the Thai Kingdom evolved and Buddhism was introduced, the former practices were not erased, as is often the goal of major religions that seek to dominate past practices. Buddhism is tolerant, and most amulets with pre-Buddhist symbols have been made by monks. A talisman or amulet is believed to counteract bad events, illness, black magic, evil spirits or misfortune such as accidents or assault. Tiny molded Buddha images were often buried in spires with the ashes of famous monks and Royal persons and the older ones have been excavated and used as powerful amulets. These days almost every Thai wears or keeps multiple amulets, sometimes having a large collection kept at home aside from those worn on necklaces and waist cords under the shirt and amulet collecting is a huge national Thai pastime. RTGS: phrakhrueang, often referred to academically as "votive tablet", is a kind of Thai Buddhist blessed item. It is used to raise funds to help the temple producing the amulets. After the donation, the monk will give them an amulet as a gift. The amulets no longer simply are considered a "gift", but a tool to help enhance luck in different aspects of life. People use amulets to improve their marriage, wealth, health, love and relationships. It is a Thai tradition to place amulets under a stupa or other temple structure when it is built. When the structure collapses, many amulets may be found. Some can be over a century old. Almost every Thai Buddhist has at least one Thai amulet. It is common to see young or elderly people wear one or many amulets around the neck in order to get closer to the Buddha. Amulets are made using the Buddha image, an image of a famous monk, or even an image of the monks who made the amulets. Amulets vary in size, shape, and materials such as plaster, bone, wood, or metal.

They may include ash from incense or old temple structures, or hair from a famous monk to add protective power to the amulets. After the amulets are made, the maker will then ask the monks who live in temples or monks from other temples join together and practice will, chant, pray and bless the amulets. This process may take from a week to more than three years.

When a new amulet is freshly made, its plaster appearance may not be attractive or gorgeous. By adding a protective casing the appearance of the amulet is enhanced and at the same time the amulet inside is protected. The price of an amulet not only depends on its appearance, but also on its scarcity, its maker, its age and the magic classes as well.

Many collectors and devotees have a trusted dealer of authentic amulets, for the study and authentication of real amulets is as complex a matter as is to be found in the antique trade, or in similar niches such as stamp collecting. Forgeries are rife, and it takes decades of study and experience to develop the skills needed to recognise authentic amulets. There are literally millions of editions from thousands of temples, spanning centuries, and it is not possible for one person to harbor the knowledge to be able to authenticate every single edition.

Hence, each expert has his own chosen line of amulets, of a particular type, temple, or artisan, which he chooses as his personal field of expertise. Ancient Phra Nakprok 7 Naga Protect Thai Buddha Statue #11931a. Size 5 cm See Pic. Story Of Phra Somdej Phra Somdej were created by Phra Buddhachan Toh Phromarangsi.

Among devotees he is addressed as Somdej Toh or Archan Toh, he is one of the most beloved and famous Buddhist monks during Thailand's Rattanakosin period in Thailand ruled under King Rama. Somdej Toh started creating the very first batch of Phra Somdej amulets in B.

The discovery place were Gemstone of NAGA EYE BUDDHA AMULET often found in the caves in the deep forest such as cave in the northeast sector of Khon Kaen province or cave in Phu Phan mountains at Sakon Nakhon Province believed was a place of mystery as the serpent and city bowels of the holy cave. The features of diamond serpent that resembles a pebble with in the vitreous, a flat surface, round spell shape have high strength difficult to cut. There are several small multicolored, each color will have features for possession of difference believed that "Diamond Serpent" is the holy relics which are the thousands or thousands of years and had protected by serpent or hermit and also had calling name many names; Diamond Serpent, Diamond Nagar, Srinagar Glass Gem, Nagar Gem, etc. Story Of Leklai The words LekLai may be translated "steel eel", an allusion to the ability of certain Lek Lai to assume the liquid state.

In many tales, one is assured that Lek Lai is not a simple mineral but a kind of metal-animal, capable of "swimming across mountains". One of the foremost powers of Lek Lai is to render its wearer invulnerable, and to prevent any fire arms from going off anywhere near him. It can just as easily be used as a weapon of attack, at once reverting to the liquid state, flowing toward the victim, invading his body by the nostrils and ears, poisoning his blood and immediately returning to its guardian in its usual state. The consequences of putting Lek Lai into action varying so greatly from one person to another, I insist that clients coming to this site use their intuition and discernment in their resolve to purchaseLek Lai and especially not to employ it as a substitute medical treatment or putting it to work. The Pidta style amulet with a monk sitting in full or half-lotus position and with his hands covering his eyes and face is a style that has become very popular among Thai Buddhists, but other Buddhists across the world as well.

Phra Pidta is a representation of a venerable monk well known for deep samadhi meditation (absorption) during Siddhartha Buddha's time more than 2,550 years ago. Hands over the eyes symbolizes a blocking out of the outside world during intense Sammabart meditation. This is jhana level meditation which can also cross-over into Abhinna. Abhinna are supernatural experiences which people meditating in the fourth Jhana can sometimes attain.

Business prosperity is a major benefit of this amulet. Yet, there are said to be many benefits of the amulets including good luck and protection from harm of all sorts. Phi Na Piya Tharo LP. Phi Na was born on March 1 BE.

The mother was taken to a doctor for treatment of Luang Pho Sin has said that the title track is a significant Thawai misery. Changed his name to Phi Na means facing, turning, changing direction, indifferent, or stop seeing each other. Since then the symptoms have abated. Then, after his father died LP. Phi Na was ordained as a novice. And a priest at the age LP. Na was ordained as a monk at Wat Nong Tao BE. 2481 year with Phrakhru Udom Khu Na Phon primate Thap Than district as a preceptor. During a monk, abbot LP. Phi Na permission to hike to the temple Wat Ko Thep Thepho just 20 days after initiation LP. Phi Na would wear out.

It is also feared dead. In just 11 days the mother has died down. Because the disease phthisis I was shuffled off to dissect the LP. Phi Na did not eat for up to 3 - 4 days and I did not sleep well.

Luang Pho Kham was asked LP. Na and the other one a monk who was afraid I'd give it to others, it is like our Is offensive to me. I will not hold the item that was paid more than 24 hours due to the US Top Rate Policy.

These are very important for us to survive and have opportunity to improve our products and service. We will help you to solve the problems. The customers come first in our mind and service. This item is in the category "Antiques\Asian Antiques\Southeast Asia\Amulets".

The seller is "mystic-collections" and is located in this country: TH. This item can be shipped worldwide.