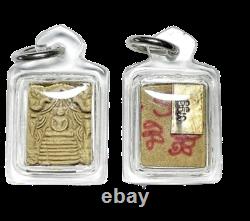 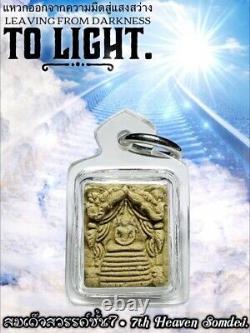 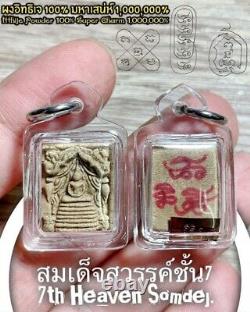 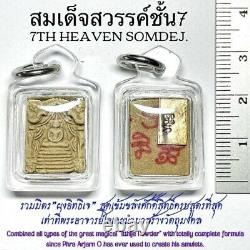 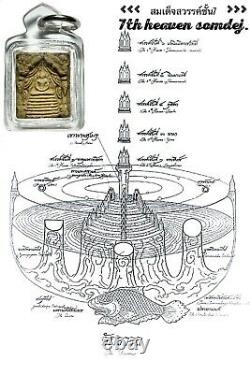 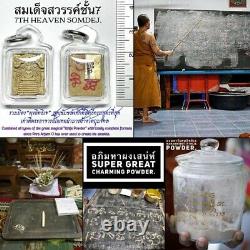 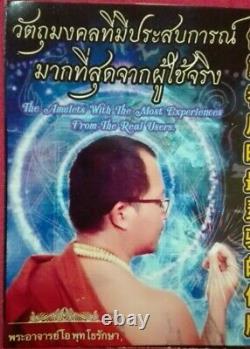 This is the special class amulet of mercy & great charm with full of meaning & beautiful Buddhist arts. The 7 layers throne means "7th Heaven", the ultimate happiness that even all of happiness in 6 layers of heaven combine together cannot equal. The opening curtain means breaking through all problems, eliminate obstacles and reborn in front of the curtain as if leaving from darkness to light. Itthije Powder is the great charming powder that is really good in case of charm and attraction. Sanguan, Wat Paipunmue also used this Itthije Powder to make his amulet until people states his amulet that Even old whore can find a good husband.

If it was in the past, the amount of Itthije powder that was used to create this version of 7th Heaven Somdej can be used to mix with others materials to create more than 10,000 pieces of amulet, but for today Phra Arjarn O said that when he creates any sacred object or amulet, it must be much more intense, powerful & special than what magic master did in the past. In order to make the amulets that he creates can be effective in the modern era for people today. Globalization moves on & change everything all the time. The creation of an amulet also needs to be developed & adjusted to keep pace with the changing world. Therefore, the way of amulet creation would not be possible to remain stationary or use the method same as hundred years ago.

There is an example for more clearly understanding. So, many of amulets created by Phra Arjarn O have a proportion of holy chalkboard powder & various materials in very concentrated amount much more than the scriptures described to mainly aim for the worshipers who uses his amulets to get the most truly impressive real results according to their needs & desires. Backside was written with "O Dhi So", the sacred incantation characters that deities & angels put on a golden tray with pedestal to offer Phra Arjarn O when he went to practice Vipassana meditation in the calm forest of Sisaket Province. He told the story that while he was meditating Anapanasati under his long-handled umbrella, he got the interesting mental phenomenon in front of him. There was a picture of many male & femal angels sitting around him. In which those angels, there was an male angel who was brighter than all. He stood in front of Phra Arjarn O with a golden tray in his hand. In that golden tray, there was no object inside except "3 Sacred Characters". When Phra Arjarn O saw like that, he voiced the 3 sacred characters "O Dhi So", then those sacred characters slowly floated out of the tray before dashing through the long-handled umbrella into Phra Arjarn O's body immediately.

Phra Arjarn O could recognize at that moment that all of 3 sacred are in "Mettajetovimuti Mantra (Metta Brahma Vihara Phawana)" or called "The Great Mercy Mantra" which is considered to be the longest compassionate mantra. Then, Phra Arjarn O chanted Mettajetovimuti Mantra to all the angels in that area thoroughly. After Phra Arjarn O chanted the mantra finished, the angels raised their hands up & put their palm together to salutation before spreading the reverberate voice of praising throughout the forest. After the sound disappeared, those angles slowly faded away. When Phra Arjarn O considered about the omen he met those angles in the mental phenomenon, he realized that may be the angels offerred the sacred characters "O Dhi So" to him because they wanted to ask him to chant & share the compassion & loving kindness for them directly.

Because "Odhiso Pharan Mettajetovimuti" is a sentence from the great mercy mantra that means "Spreading Loving Compassion From The Mind That Approaches Dharma For The Specified Recipient". And in other words, it may be that the angels want to give a special spell which is exclusive to Phra Arjarn O directly like many special spells that teachers in the spiritual world bring to teach him.

Surprisingly, when Phra Arjarn O tried this spell "O Dhi So" in performing rituals or incantation of his sacred amulets. The result is quite clear that the power of the spell Phra Arjarn O got from the golden tray is wonderful, holy, & great mercy. Not only can makes people love, angels admire but, also able to make even the enemies from a former life reduce their vindictive feeling miraculously. Therefore, Phra Arjarn O praises these 3 sacred charecters "O Dhi So" to be the heart of mercy that is infinite & greater than all kindness.

If you have faith into something , you can felt invisible power inside what you. It is always be better true for amulets users. The amulet is a personal belief.

The result may different for each person. We will try our best to resolve any problems with you. If you are not satisfied when you receive your item, please contact me first and return it within 7 days. Item must arrive 100% as same condition as in the pictures. Thank you very much for visiting the product.

The item "Buddha Magic 7th Heaven Phar Somdej Amulet Thai Itthije Powder Charm Ajarn O" is in sale since Wednesday, January 20, 2021. This item is in the category "Antiques\Asian Antiques\Southeast Asia\Amulets". The seller is "success6395" and is located in Sankampheang. This item can be shipped worldwide.