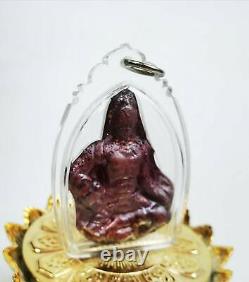 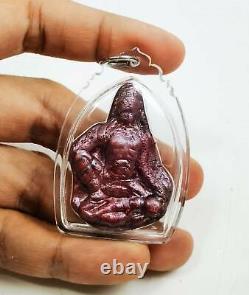 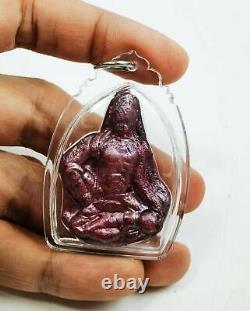 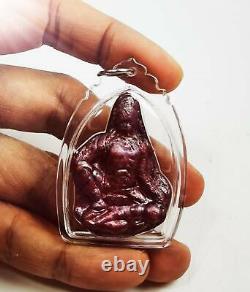 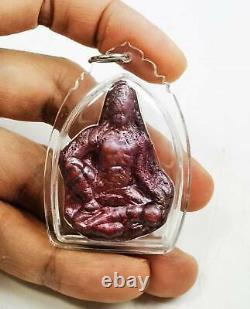 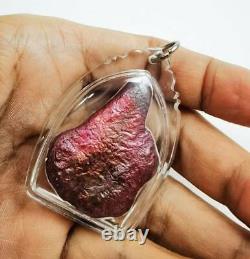 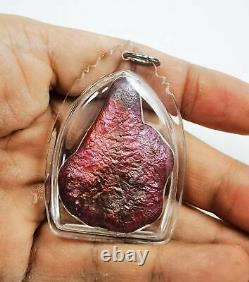 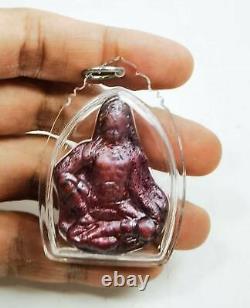 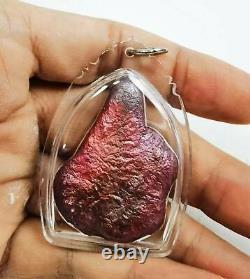 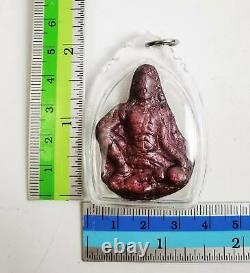 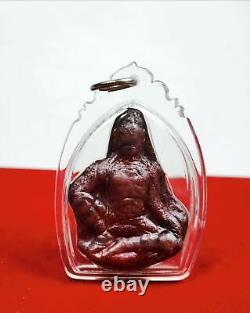 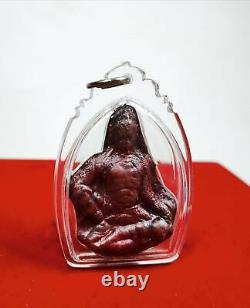 The Jatukham Rammathep amulet is believed by millions Thais and to some extent Malaysians and Singaporeans, to bring wealth to its possessor. Have only in my Store. Very very good item - nice powerful collection.

Suriyan Raachaa Leklai Amulet is respectfully taken from a cave in Donsak district, Surat Thani province. It is a living thing and full of supernatural power that can protect you from dangers, prevent you from getting endangered by any weapon and bring good lucks to you.

It is composed of many kinds of holy minerals and greatly benefits its owner. Possessors should keep themselves in a moral way and the power of the Leklai amulet will make happiness, prosperity, and security happen in their lives. The Leklai suriyant racha is good for everything also for protection/invulnerability and fortune in business.

It comes down to a contract base. Was remade to come down very hard. The History of Jatukam Ramathep. About 1700 years ago, it was a time of war and trouble. There lived a king and his princes in Central Siam.

The elder prince named Jatukam and the other named Ramathep. After many years of war, the King finally conquered and managed to secure Sri Lanka into part of his Kingdom.

There was a saying that the King possessed a sacred treasure, this was none other than the holy relics of Lord Busdha. Before the King began his journey to the newly conquered land, he tasked the protection of the relics to his two princes, & ordered them to guard it with their lives. Some time later, the princes received information of plan by their enemies to capture the relics. They immediately informed the King in Sri Lanka. The King instruction was to quickly take the relics away by sea and head to Sri Lanka.

Halfway through the journey, a thunderstorm struck and their ships were sunken. Except the two princes, the rest of the crew did not survive. The two princes were washed ashore, but well. Without the sea transport, they could no longer bring the relics to Sri Lanka. They started praying sincerely to the relics, saying: Dear Enlightened One! If this land we step upon is a holy piece of land, then please guide us let us live a new life here. With our people, we shall guard and protected your relics forever. Later the two princes built a temple on this holy land and with much hard work, they also establish a wealthy and strong city. They brought new hope and peace to all the people. In remembrance of the great deeds by the two princes, they named this place Nakhon Si Thammarat in their honour. This is now located in Southern Thailand at the present time.

And they promised to guard the Relics with their lives. They had earned respect from both the heavenly and earthly beings. Later, the people combined the two princes into one and named him Tao Jatukam Ramathep when praying to him.

Tao Jatukam Ramathep becomes one of the most respected and popular deities in the South of Thailand. In olden days, Tao was used to address noble ones.

It is believed that those that pray to Tao Jatukam Ramathep will be blessed with fulfilling life and better in all aspects in everyday work. (End) Wat Phra Mahathat The temple is located on Ratchadamnoen Road in Tambon Nai Muang, Amphue Meuang of Nakhon Si Thammarat province. This is one of the most important historical sites in Southern Thailand. The stupa, 55.78m high, has a distinctive Sri Lankan style.

The top of the spire is entirely covered in pure gold. Inside the temple are many buildings of importance, especially the royal building which has beautiful architecture from the Ayutthaya period and the Sam Chom building, where the Buddha image garbed in royal attire - Phra Si Thamma Sokarat is housed. There are also the Phra Maha Phinetkrom (the equestrian image) building and the Thap Kaset building; while the Khian and Pho Lanka buildings are used to display artifacts donated to the temple by Buddhists from the whole region. It is reported in the Thai press that during the unprecedented Jatukarm amulet craze just a few months ago, the temple where the talismans originated, had been fully booked for rituals.

The temple is located on Ratchadamnoen Road in Tambon Nai Muang, Ampur Muang of Nakhon Si Thammarat province in Thailand's south east of Surat Thani and north of Trang and Satun on the eastern coast. This is a very important historical site. The stupa (point of the top of the chedi) is 55.78 meters in elevation. It has an overt Sri Lankan Buddhist style. Over the entrance way Wat Phra Mahathat are statutes of Tao Kadtukam (Jatukam) and Tao Ramathep, the guardian gods of the holy Buddha relics housed within. The original Jatukam amulets were 5 centimeters in diameter, and were created in 1987. Since that time a number of miraculous events have happened to people wearing this amulet and it gained a lot of respect. In particular wearers of the amulet were protected from harm in many instances. In one case, the guard at a bank was almost killed by robbers of the bank but their gun missfired 3 times. He attributed it to the prayers and devotion he had for his Jatukam amulet he wore faithfully around his neck. The maker of the amulet Khun Phan, was a maker of the amulets. He was a highly respected police Major General that died at the age of 108 on 9/5/2006.

He was so loved and respected for his selfless acts and ruthless criminal hunting to protect the public that he was given a Royal Cremation Ceremony where over 200K people came to the Wat Phra Mahathat temple in Nakhon. His Royal Highness Crown Prince Maha Vajiralongkorn presided over the cremation ceremony. The funeral was under the patronage of Their Majesties the King and Queen.

Upon Khun Phan's death, the prices of Jatukam amulets have increased much higher especially those created by him. Over the next couple of years many Buddhist temples made Jatukam amulets to commemorate Jatukam Ramathep and Khun Pan.

The Jatukam amulets we sell at this site were created in Nakhon Si Thammarat and were for the Wat Phra Mahathat temple itself. Fund proceeds from the Jatukam goes to building and repairing of temples, pagodas, medical supplies, education funds, quarters for the monks, building libraries, renovating temples, poor children and welfare services. Jatukam told the devotees that those who pray to them and wear their amulets have been foretold that they must be act good to receive good consequence and to fulfill good deeds and merits whenever their prayers have been granted.

Therefore, Jatukam images remind them to do good deeds and merits, thereby their devotees shall be filled with loving kindness and compassion and enjoy protection against ill health, and predominantly crimes against them. Jatukam Ramathep amulets are worn by tens of thousands, perhaps hundreds of thousands of people in Thailand. The amulets are especially worn during ceremonies and special days. Since Jatukam amulets became popular, there have been many styles of new amulet that have come out that are similar. There are Luang Phor Tuad Jatukam style amulets, Luang Pu Jumnien Jatukams, Pra Bit Tar Jatukams, and many others. The strange Leklai shape looks very beautiful. Super Psychic element for Prayer Amulet. Invite This Powerful Leklai from cave. Thong Pla Lai or Gold Amulet has bright gold color that looks glittering like an eel's belly. It is made of several kinds of holy minerals, can be flexible on fire and has water like mobility.

The Gold Metal Amulet can be found in the rainforest and is believed to be in the care of noble angels such as the Lord of Jungle, King of Naga and powerful hermits. The power of Thong Pla Lai or the Gold Metal Amulet benefits possessors a lot of ways. For example, it can bring good lucks, prosperity and security to possessors and their families. Moreover it can protectpossessors from dangers, give the power of invulnerability, support businesses and trading and so on. RED LEKLAI = Suriyan Racha.

How to worship the Leklai Amulet. Offer a glass of honey put near amulet on private shelf. Do this 2 times / week to worship Naga wand hermit Leklai. First, say Na Mo for three times.

Lp somporn is disciple of Por Kai (Ajarn Lamyoon Kamnak). Lp somporn and Por kai go togather to invite Leklai form deep cave at Surat Thani province of Thailand. Kai Lamyoon Kamnak, who is an expert in the mysteries of metal charms of Surat Thani. His Leklai have great might and are respected and worshipped by people all over Thailand. Thai and foreign people, such as people from America, Japan, England, Malaysia, Singapore, and China.

His Leklai are mighty and blessed, and are known through the world. Master : Ajarn Lamyoon Kamnak (Por Kai). Por Kai with Lp somporn in Leklai ceremony.

Leklai Kod Phee pagoda (por kai). Lp somporn with Ajarn Lamyoon picture (his leklai professor). And also for your valuable collectible thing. We are expert collector and trader buddha amulets , antiques , Talismans items from Thailand & Southeast Asia. We open amulet store in Thailand too. All of our Amulets are 100 % Satisfaction guarantee and either straight from the temple or from very reliable sources including dealers and collectors around Thailand with whom we are afilliated.

You can trust that the items are Rare, Sacred, Genuine and beautiful Items. The item "Jatukam Ramathap Naga RED Leklai Lucky Rich Thai Amulet Buddha wealth pendant" is in sale since Wednesday, September 8, 2021.