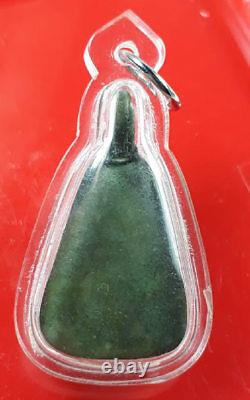 A Thai Buddha amulet Thai. Often referred to academically as votive tablet, is a kind of Thai Buddhist blessed item.

Thai Buddhist monk will give amulet as a gift to them. With the change of time, amulet no longer simply means as a "gift". But a kind of tool to help enhance luck in different aspects, some people use amulets to improve marriage, wealth, health.

It is also a tradition to place Thai amulets under stupa or other temple structure when it is built. Some can be dated back over a century. Almost every Thai Buddhist has at least one Thai amulet. They have great respect for the Buddha.

It is common to see young or elderly people wear amulets. Or packaged by amulets around the neck in order to get closer to the Buddha. Amulets "King of amulets" said, also Known as "lucky amulets" is one of the famous amulet. Each amulet collectors must have one and it is the best and foremost choice to the new believer of Thai Amulet.

Pha LP NGERN own the most noblest status in Buddhism. The most famous of this kind is the Phra LP NGERN Wat BANGKLARN produced in around 1866 to 1871. By LP NGREN Wat BANGKLRAN Thai. He is among the most respected monk in Thailand too. LP NGERN Wat Bangklarn, PICHIT Provice. Luangpor Ngern born at 16 September B. 2353, at Bangklarn village, Pijit Province. LP Ngern become novice monk at the age of 12 years old at Wat Chanasongkram. When he turn 21st years old.

He become senior monk at Wat Tongpu then move to Wat Kongkararm. LP Ngern don't like much because an abbot of this temple interest in black magic and stuffs.

Ngern alway interest only the teaching of Buddha, then he have go for Tudong (Monk's Journey). Later on he become an Abbot of Wat Bangklarn. Ngern have success in Dhamma. And become one great monk of Thailand, his amulets are very famous with many story which protect the wearer and bring great fortune wealth.

Is good everything Powerful protection, Invulnerable, Metta mahaniyom, Love charm. Good Condition and beautiful Old Invaluable , Number of creating is very low. And it is difficult to find and very rare.

We take care all our customers and give good service. Importantly is complacency of customer. When you received item with satisfied. If you have any problem.