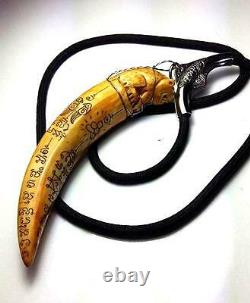 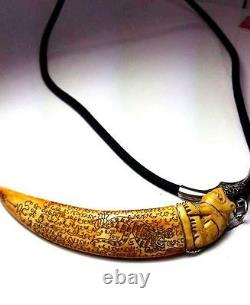 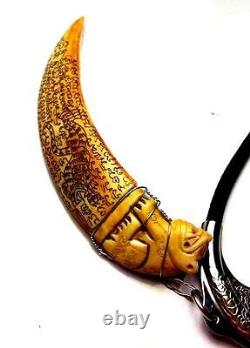 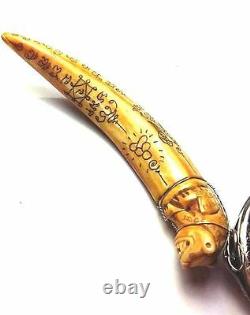 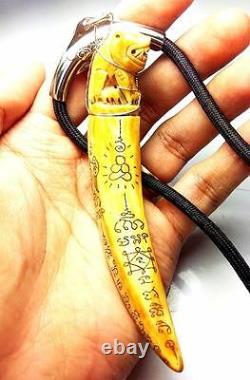 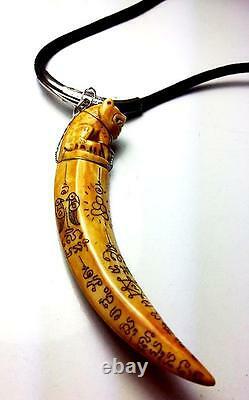 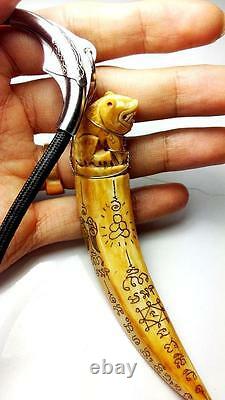 LP Pern Pig Tooth Carving Tiger Thai Buddha Amulet Life Protect Gain Wealth. Tiger Pacifier Monk, Luang Phor Pern, was one of the most respected guru monk back in Thailand. He is famous for his powerful amulets, tiger related relics (such as tiger's tooth or claw) and Sak-Yant, the art of scripture tattooing. Luang Phor Pern was borned in 12th August 1923 in Nakhon Pathom province. Not long after he was borned, his parents decide to move into a village known as Tung Kork Barn. The trail to the village was always lurked with robbers. Thus, making those who wanted to use the trail feel vulnerable.

As a result, before he ordain as a monk, he was already interested to ancient warriors' use of magic as protection, amulets, and super natural things. Later, he became student of Wat Tung Kork, Luang Phor Deang. Who was famous for his skilled magic. Luang Phor Pern - Wat Bang Phra (Nakhon Pathom).

Luang Phor Pern was ordained at the age of 25 at Wat Bang Phra more than 4 year, until Luang Phor Huem passed away. He has been an expert of concentration of mindfulness in Buddhism way. After that, he went to Luang Phor Oh Pah See temple for building up knowledge of Visha and Buddhism way, about 1 year.

In the year 1953, Luang Phor Pern went also called Tudong in the deep jungle alone to border of Thailand and Burma. Tudong is monks journey to gain knowledge to build up good karma and to know the teaching of Buddha. In the year 2509, admirers and disciples of Luang Phor Pern erected a statue of him in honour and respect of all the great acts of compassion.

He had performed for the folk of Nakhon Pathom province. At the age of 26 Luang Phor Pern would become ordained as a Monk. He was ordained by Phra Ajaan Huem, who was also his teacher in Buddha Magic and Sorcery. Luang Phor Pern was a Disciple of "Agkara Khorm" , and a student of yant composition and application.

His yant were renowned for the power that they carried. Luang Phor Pern studied vipassana meditation with utmost dedication for many years.

He became a disciple of Luang Phor Opassi who was one of the greatest monks of the time, known for his white magic power. After this, Luang Phor Pern went "Tudong" (Pilgrimage) in the jungle of Kanchanaburi which was known as being the thickest darkest jungle full of dangerous animals and evil spirits.

It was said that when Luang Phor Pern was in the jungle, he was protected by a huge fearsome tiger which always accompanying him. Since then, the tiger became the protective symbol of Luang Phor Pern. Luang Phor Pern seemed to be loved and respected wherever he traveled, due to the fact that he possessed such a transparent personality that allowed all to see his great compassion and his power to help folk with his magic. Luang Phor Pern later became the Abbot of Wat Koeg Khaemao in Nakorn Pathom, which at that time was not only in a bad state of repair but was also in an area that was inaccessible, being thickly forested.

He developed and repaired the temple gaining the love and respect of the local people. His very first amulets were consecrated at Wat Koeg Khaemao.

It was from the donations received in return for those amulets which were consecrated by him that he was able to renovate the temple. After many years at Wat Koeg Khaemao he was invited to become Abbot of Wat Bang Phra where he became better known for spiritual tattoos or yant especially the tattoo festival in the month of March. Luang Phor Pern passed away in BE2545 at the age of 79. His temple Wat Bang Phra is known for its protection tattoos. The item "LP Pern Pig Tooth Carving Tiger Thai Buddha Amulet Life Protect Gain Wealth" is in sale since Monday, July 20, 2020.