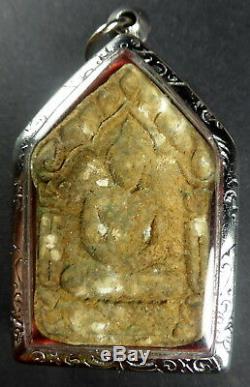 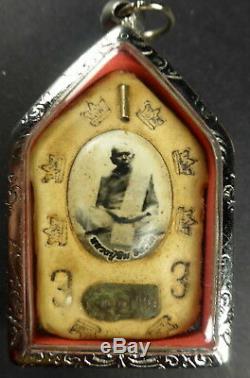 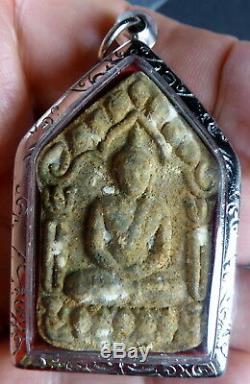 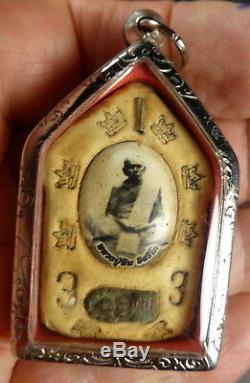 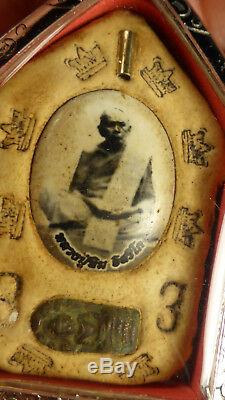 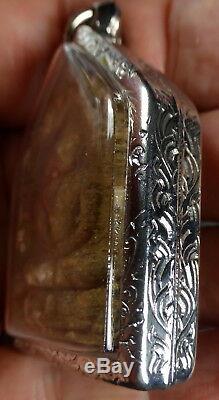 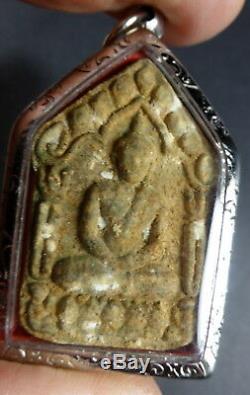 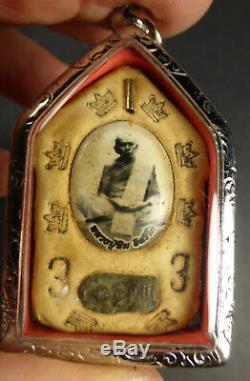 L P TIM PHRA KHUN PAEN ROOP TAI AMULET from THAILAND. 60 mm (2.36 inches) high x 35 mm (1.37 inches) wide. All of our SACRED BLESSED & EMPOWERED items are guaranteed to be authentic and as described. This is an amulet from Thailand called a'PHRA KHUN PAEN'.

He is the legendary Ayuthaya warrior who lived 450 years ago. His name later became the name of a kind of votive tablets found at Wat Bankrang, Suphanburi Province, about a century ago. Khun Paen was born in Suphanburi Province some 70 km. Northwest of Bangkok but grew up in the close bordered Kanchanaburi Province, where the world wide well-known Bridge over River Kwai is situated. Khun Paen was a disciple of Archan Kong, a magic-expert guru monk, for magical studies.

By his skillful fighting, he was appointed by the king to be Khun or a high ranking military officer. The Magical power of Khun Paen. Based on old legends, Khun Paen was handsome and very attractive to ladies. Although, he had many wives many ladies still fell in love with him. Khun Paen had great magical knowledge.

He used magic to make himself invulnerable and unseen to enemies, to change the marching track of the enemies to become labyrinthine field, and to change leaves of the tree to become wasps to sting enemies etc. Khun Paen is also a master in mantra or formulas with supernatural power. A Khun Paen amulet used for such purposes as stunning enemies, transforming his body into other forms, opening locks and chains, putting everyone else to sleep, and converting sheaves of grass into invulnerable spirit warriors. A Khun Paen amulet is also used for creating love formulas to captivate women, and to allay the wrath of the king. A Khun Paen amulet is used and worn to fulfill human desires, act as a great wish fulfilling power and gives great power to drive us towards achieving what we want.

Roop Tai (Guru pictures- photos) are one of the most direct ways in which a Devotee can connect with a chosen Guru Master and receive blessings directly from him. A sacred Roop Tai amulet is a very popular type of amulet in Thailand.

A picture of me (Michael) being blessed by L. Samang at the Wat Bang Phra Temple, Thailand. A TAKRUT is rolled up metal foil that is inscribed with yants. A Yant is a sacred geometry design incorporating Buddhist psalms and magical formulas that invoke various elements and powers of protection and various blessings. The Buddhist psalms written within and around these yant are know in Thai language as "kata".

A kata is what we might call in the West a "Mantra", the word Mantra is a Sanskrit word meaning prayer. The casting of a magic spell is similar to the recitation of a Mantra in the sense that the concept of invocation / evocation is inflected in order to achieve a certain result. The ancient tradition of tattooing a sacred yant is probably at least one to two thousand years old. The oldest definite historical evidence of sak yant being practised in Thailand dates back to around the times of King Naresuan Maharaj, around the time that the kingdom of Ayutthaya was still in its golden age. The warriors were tattooed with Yant and also wore "Suea yant" (yant shirts, that had protective designs intended to ward off the blows of sharp weapons inscribed all over the surface). The Yant designs themselves are not the only element necessary to enable the magic power believed to be contained within these sacred geometrical designs. Many Buddhists believe in the power of the Yant.

Some Yants are meant to protect against physical harm. Whilst others are meant to bring good luck. Since the time of King Naresuan. , Thai soldiers have sought protection from the power of sak yant and the wearing of amulets.

In the Korean, Vietnam and second world wars, Thai soldiers were nicknamed tahaan pee Thai. Or "ghost soldiers" by the allied forces, because of their sak yant tattoos and amulets. LP Tim of Wat Lahan Rai. LP Tim is one of the most famous and sacred monks in Thailand.

Most Buddhists believe that by wearing an image of Buddha or a Thai Monk (Luang Phor) it will give them protection and great luck. Most Thai Buddhists will never leave home without their sacred amulet. The sacred amulet will dispel any evil, it will protect you from disease, misfortune and accidents and guard you on you way.

These sacred Buddha amulets will help you to gain huge wealth, success in your every way in your work or your total life. These sacred blessed and empowered amulets can vary in size and in price. This depends on who made the amulet and the rarity. Due to the huge demand for these sacred amulets there are many fakes around and you must be very careful not to be misled.

IT IS VERY IMPORTANT THAT OUR AMULETS ARE TREATED WITH RESPECT BY WEARERS. All of our SACRED BLESSED & EMPOWERED items. Are guaranteed to be authentic and as described. A picture of me at the Wat Bang PhraTemple, Thailand. For centuries many Thai Buddhists have believed that by carrying a Blessed Thai Amulet with Buddha images, Luang Phor (Thai Buddhist Monks) or Gods you will be given good luck, and protection. Thai Blessed amulets will guard you from danger, will dispel evil and negative bad and dangerous energy, and protect you from disease. It is believed that a blessed Thai Buddhist amulet will help you to gain great wealth and will guard you and give you success while you are at home, at work, or travelling.

Thai amulets can be cast from metal or carved from a piece of wood, or made from a special magical powder that contains hundreds of different special and secret ingredients that are then pressed into a mold and then baked. After this is done the amulets are blessed by monks in order to give the wearer the sacred spiritual power of protection. It is important that Thai Buddhist amulets be treated with respect by wearers.

In those days you thought that. Nothing at all was impossible, you could do anything and everything. In those days long ago your spirit had not been reduced by negativity you believed in pure and special magical powers and your mind was open to receive and discover and to understand the mysteries of life.

These Sacred Blessed and Empowered items have PURE POSITIVE SACRED POWER and can and will be attuned to you. Do you remember long ago that you had the ability of second sight, and other special abilities.

You might never have revealed this to anyone as you felt slightly afraid and were not sure in yourself. Years later life takes its toll and you now think that these special abilities that you had years ago are now gone. These abilities NEVER GO, you still have the same abilities but you now have to clear a path to open your mind and be able to go back to your childhood and let your mind open up. When you work with our Sacred Blessed items you will soon realise that these are SACRED SPECIAL TOOLS and will work for you in many different ways.

They will open up a PURE POWER FLOW FOR YOU, and enable PURE POSITIVE ENERGY to enter your divine spirit. Our sacred, rare, empowered and blessed items are being made available for the benefit of practitioners, like you, who would like to have holy objects as devotional support to your practice. Rather, we are making them available with the express wish to benefit others.

All funds in excess of our costs help us to continue our activities. The item "LP TIM PHRA KHUN PAEN ROOP TAI BUDDHA AMULET 1 TAKRUT FROM THAILAND" is in sale since Wednesday, July 18, 2018. This item is in the category "Collectables\Religion & Spirituality\Buddhism". The seller is "spiritual-sky" and is located in Bournemouth. This item can be shipped worldwide.