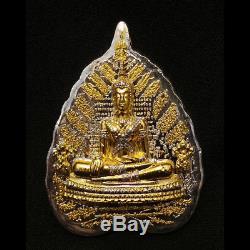 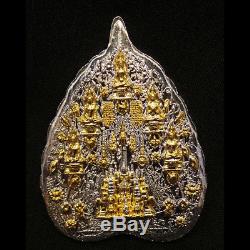 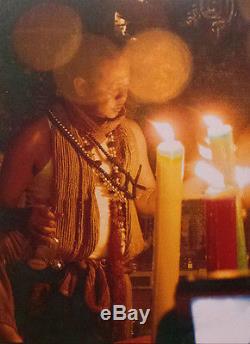 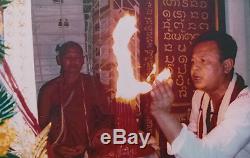 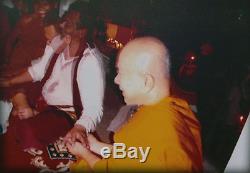 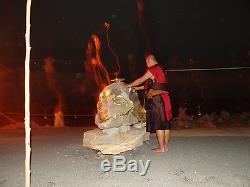 Properties: bring prestige, wealth and success. No one knows his background but his followers called him as Niranam Tribumi, or Ajarn Yai Niranam Tribumi. Many people mention about him and praise in his holiness. If he wants to become famous, he has better described himself to the public.

But in fact, there are only a few people know his real name. This is because the word, Niranam means no name; one doesnt want to be exists. However in Buddhism the meaning of Niranam also means no one, no name, no existence. The word, Tribumi in Buddhism simply insists of 3 words which is the heaven, the hell and the world but for him, it means desire, existence and non-existence ground. The legend of his holy is unbelievable and beyond words.

There are lots of stories that science cannot explain, unless you see it by yourself. Most people experience his holy through worship or possess his amulets.

Many people have seen some aura from his amulets. They have also seen many unusual photos from his followers. They saw spirit, angel, hermit, the Bodhisattva, or Naga from the flame of the candle and sometime shine out from the middle of his amulet etc.

During his connection with insight, we sense his power and perfection. However, there are so many unanswered questions about his holy. Normally, when he celebrates his incantation ceremony on the amulet, he always invites the masters, the noble monks and any seniors in meditation to attend his ceremony such as Laungpu Kowitpattananodom (Laungpu Kiang), the abbot of Noon Kade Temple in Sri Saked, Laungpu Lamai Titamano, the abbey of Suanpa Smunpai (Herbal Garden in the Forest) in Petchaboon, Laungpu Chanhom Supataro from Keelek pond in Ubonrachatani, Phra Ajarn Dang Oparso from Rai temple in Pattani, Phra Ajarn Pasut Piyathamo (Laungpoh Pasut) from Nai-Tao temple in Trang and many more. We normally heard the word, Phutapisake, which means incantation on Buddha figure.

But he said that no one can incantation on Buddha image because the Buddha is above all 3 grounds; the heaven, the hell and the world. That's why he has to invite all the masters to meditate and concentrate their power into one.

It likes us keep a positive power in an object and this object will pass out positive power to anyone who pray for it. This creates holy through the prayers.

His task is to connect and plan the process of transfer from the recent Buddha to Metteyya era. This is a background behind his creation of all amulets which he has created with his own funds. He has offered free amulets to soldiers, policeman, and the public in order to inherit Thai culture and Buddhism with no publicity. He doesnt want anyone to hold on him but he or she should feel faithful in the holy of Buddha, bring peace in human and communicate the core of Buddhism to survive for 5000 years until Metteyya era. He said that he has collected his perfection through many lives.

He collects perfection through his creation of amulets. His followers realize that he is only giving not to take. He always happier to give than take no matter how much valued they are. His amulets are full of power and holiness. His design is the combination between Buddhist art, Deva art, letter, occult number and any symbols including angel, Dhamma and universe language. You can see them through his amulets. He has behaved himself through many lives. He doesnt need any master to educate him.

For instance, when he concentrates his mind with any symbolic, all symbols would come up and he would comprehend well, not only one language but all languages in the world. Therefore, whoever possesses his amulets; the man would sense his holy and feel safe under its protection. His amulets would bring luck and happiness to the owner of the precious. He always says that the possessor should behave and lives with morals. The Dhamma and spell are not for sale.

Everything is impermanent, subject to suffering, and non-self. Everyone should believe in cause and reason and in reality. When you practice, you should reach nirvana and act like a master. He also teaches his followers to make merit and donation. This is because no one can live above karma rules; even the owner of amulets can lose to merit power and karma power. Karma will follow the man, no one can get away from it. We can only hold or slow their time by making more merit. Therefore, the man should regularly make merit with his determination.

Merit is not about quantity but it is all about quality and intention. THANK YOU FOR YOUR VISITING AND GOOD LUCK KHOBKUL KRAB. The item "Nimitwimarn Buddha coin Ajarn Mom Thai Amulet bring prestige wealth success" is in sale since Sunday, December 24, 2017.