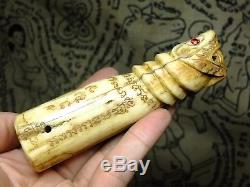 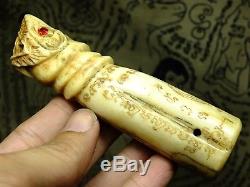 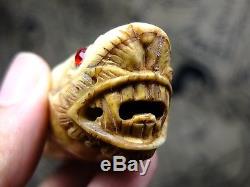 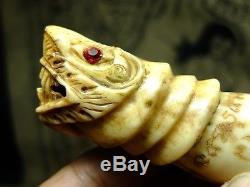 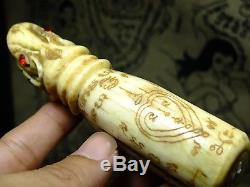 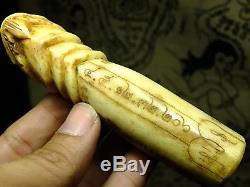 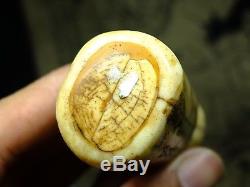 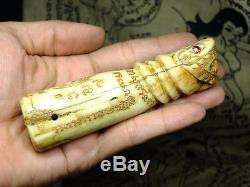 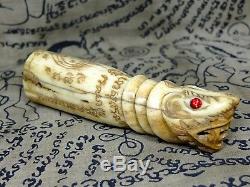 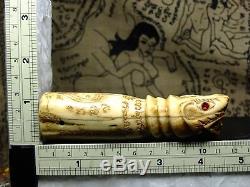 Chamod craved Bone LP pana. The Mae Nur Hom amulets are amulets that contain the flesh of a Nun who requested her flesh be used to make amulets in order for her to gain more merit after passing on and LP Pinut granted her wish by making amulets out of her flesh. The Mae Nam Hom amulets do not contain any Nuns flesh how ever broken fragments of the Mae Nur Hom amulets were used to make certain batches but is not clearly recorded.

Where did LP Pinut learn to make star amulets since no one elsed in history made them? The reason why ther star amulet is only made by LP Pinut is because he learn this wiccha from a deva called the Prah Palimard. While many monks claim to be able to trensend to higher realms and speak to devas and other monks (especially the younger ones in recent times) such as Prah Prom or LP Thuat I believe many of them are lying. It takes great meditative abilities to be able to do this.

Some examples of monks who are able to do this is LP Opasi - LP kob, LP Jong and Kruba Duang Dee amongst many other great Guru Monks. LP Pinut similarly meditated to the realm of Prah Palimard and learnt this unique wiccha form.

Incidentally LP Pinut was the disciple of AC Mun likely one of Thailands greatest meditative forest Monks in history Guru to many other top monks in Thailand and around the region. While some Monks learn lots of wiccha the lack the meditative ability to properly consecrate the amulets other Monks meditate heaps and are able to use the most basic of spells to do wonders. LP Pinut was a combination of BOTH.

Note: LP Pinut spent 47 years as a forest monk walking all the way across 5 countries including Burma, India and Cambodia most of this time with the great AC Mun. Luang Pho Pinak, was born in Amper Tatan Janwad Utthaitani on the 1st of March 2456 (1913) and was described as a outgoing young man that loves to enjoy life and live care free. As a young man he was also known to be afraid yet at the same time interested in the topic of ghost and spirits/spirituality thus decided to embark his journey as a monk looking to find answers. He finally ordained in the year 2481 under LP Sin (A senior monk in the province with over 70 pansas/years of monkhood) in Wat Nong Tao also in Utthaitani, he was 25 years of age. After passing his pali and Buddistic exams he moved on to Wat Patsutawa Janwad Sarkon Nakorn where he would meet his main preceptor Luang Pu Mun Buritatoe and would follow him for the next 42 years in tudong (forest monkhood). LP Pinak along with fellow students of the great Arjan Mun would travel (Via walking) far and wide with nothing but their alms bowls and robes to a total of five countries including Burma, Laos, Cambodia even as far as India where they visited all the known Buddistic locations in their quest for pilgrimage and to learn and progress in their quest to reach higher realms during meditation. During his journey back to/in Thailand he would raise funds to build temples (30 in total) throughout Thailand the more notable ones being.

LP Pinak relocated to Saraburi in 2527 and would build his last temple Wat Sanamlao which was completed in 2530 and would spend his last 19 pansas (rain retreats) there before attaining Arahanghood (A state where one is completely detached to the material world) on the 13 of November 2545 at 0514hrs. LP Pinak was known to be one of Thailands greatest mediation masters having learnt meditation from perhaps the greatest masters of all time Luang Pu Mun Buritoe, and being closer associates with Luang Ta Mahabua of Wat Pla Bundat Janwad Udonthani, was above to achieve high levels of mediation concentration reaching higher realms.

This along with wiccha (magic) that LP Pina learnt over 42 years of being a forest monk enabled him to create some of the most powerful amulets ever made. Having built 30 temples, LP Pinak also accumulated a lot of merits (Boon) which is another factor that leads to the ability of creating good amulets. Being able to attain high levels of meditation LP Pinak also obtained additional wiccha taught to him by a Deva (during his meditation in a higher realm) called Prah Palimard or Prah Sood. Namely The Dao (Star amulets), Duang Tar Pattien, Palakid Hua Chamut, Palakid Ling Tong Kum, Yoni, Tarkruts Debuk and several other deva or Buddha amulets which are very sought after today. LP Pinak was weak and always sick when he was young, thus, his parents thought he did bad karma in last born.

They finally decided to send him to a temple - Wat Nomdao , looked for LP Shin. They were advised by LP Shin , to change name Tatwai to Pinak.

LP Shin chanted for him and asked him become a monk when he had grown up and take care of his temple. He promised to LP Shin and slowly he became healthier. His father got ill and passed away year2481, then he buak samanen(became small monk) as he not over 20-year-old. He chant and meditate every day to gain merit of his father. When he was reach 20 , he buak phra (became real monk) at Wat Nomdao (LP Shin passed away that time). He was given name Phra Pinak , BiyatTaro (Thai call Char Ya). First , he thought just be monk for 5 days , so that could help his mother working and taking care of siblings. But , his mother asked him buak phra 20 days. During those 20days, villagers invited him to chanting and praying for death people (died of stomach disease). The death body was operated and the inner parts of stomach was visible, that was the first time LP Pinak saw the whole process to operate the stomach. That time no formalin one type of medicine that preserve death body, the death body very smelly.

He was scared and he decided to move to other temple as he didnt want to see death body. He moved to another temple, but still he saw they did the same thing to dead body and he decided to move to others temple again. Again, he moved to one temple, there was a master , Lungpo taught him that , every death body sure will be operated and that was the nature thing happened , he was advised to get USED TO this kind of situation. He realized and he trained to look at the death body every day. After one month , he decided to be monk forever, and the temple is Wat Kot TeiPo (Changwat, Chainat).

He went back to Wat Nomdao and he told his mother that he decided to become monk forever. He was furthering his study in monk field. After he graduated, he went to Wat TangTaGor , looked for LP Pao and LP Pong. Its took 5 days 6 nights to arrive the temple. When he arrived, villagers told him that they passed away long time ago , left LP Un and LP Dam.

He continued study and learn at this temple with those two masters. BE 2484, war within Japan and Thailand. All Thai army are wearing Thai amulets to protect themselves.

Meanwhile, Japan army are planning to boil the amulet and eat the amulet as they thought this could protect them. Villagers heard about the news and Lp Pinak's mother also knew about that , but she misunderstood that Japanese going to kill Thai army and boil them.

She sick and become crazy as she was too worried. They had to lock her inside the room, Lp Pinak got the news and he went back home as well as asked his brothers to send their mother to hospital. His brother also became monk at Wat Nomdao. They brought their mother to Wat TangTaGor(Changwat, Lopburi).

There was a master , Arjan Phong, he cured their mother and she was recovered within 15 days but there was new sickness , her leg got inflammation. LP Pinak was sad and he thought maybe that was sickness of her bad karma of last born. They asked LungBu Man and LungBu Sao , LungTa Mahabua (student of LB Man and LB Sao). Lungbu Man gave him teaching about 1 month, LP Pinak planned TUDONG meditation and looking for new Arjan or masters. He went to Laos , India, Chambodia and others countries to look for great masters and learn from them. He did meditation and praying sincerely all the way. He became a great master and back to Thailand. After Tudong , he came to Wat Senumlao (Changwat Saraburi). Villagers invited him to stay at that Wat and continue build the Wat(That time Wat Senumlao still small and old). He stayed there for 19 years and all villagers believed him so much.

He got lot of devotees and supporters as well as students. BE 2545, he found out lung's cancer and left one side. He knews that he is incurable, he went back to temple on 13th. On 14th, they had meeting and he arranged all the jobs to other monks.

He asked all other monks to see the death body so that they knew the nature of human. They kept repeating this way of methods and do meditation and kept lot of death bodies. He was planning to build temple and needed to make amulets. During his meditation , he saw the star and eyes, and God Jelumtan want him make Palakit Hua ChakMuk (Palakit Animal Head using wood). Gods and spirits of death body asked Lp Pinak used their body to make amulets. The spirit hope they could help others with their power and they hope they would receive merits. Death bodies that were dried used to make powder and oils. Lucky Star (Daong) and Eye (Duan ta) were made of these bodies and woods. Those amulets are not black-magic but it is the highest meditation method which the master could do. The amulets consisted of human fresh, meaning spirits are inside. Thai people believe the amulets very powerful and bring luck to them. But they must respect the spirituals and when wearing , cant wear together with other Gods amulet (such as Phra Prom, Lershi and etc). You can wear at waist and If you want to wear at neck, never wear with other amulets with Buddha image. Lp Pinak had made several types of amulets namely - 1. Thai Buddhist Amulet Power Can Help And Improve More Better Your Life To Do Anything Smoother And Easy. Help The Owner More Get Better Anything That Your Wish And Hope. Help And Protection Owner Change Bad Situation To Good. The item "Old Rare Chamod craved Bone LP pana Wat Sanamlao's.

Thai buddha amulet" is in sale since Tuesday, February 06, 2018. This item is in the category "Antiques\Asian Antiques\Southeast Asia\Amulets". The seller is "amatasiam" and is located in NAKHONSAWAN, NAKHONSAWAN.