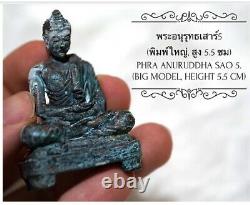 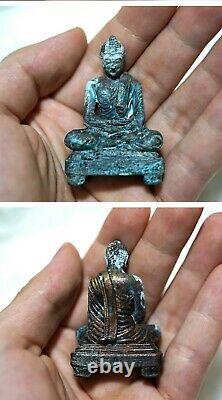 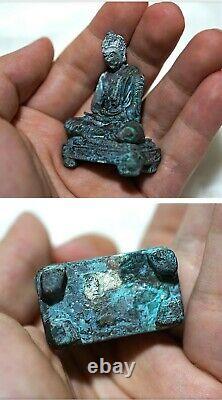 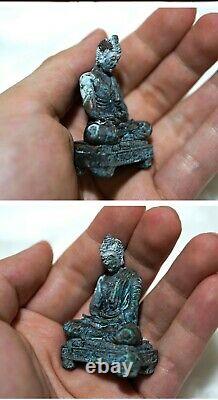 "Phra Anuruddha" is the great amulet of abundance & happiness. Who prays "Phra Anuruddha" will never face with shortage, badness, sickness, disappointment, inefficacy, and failure because he nevers know "Not Have". Moreover, the prayer can bring this amulet to soak in the water for making "18 Revelations Holy Water" also. The material of this amulet made from various kinds of holy matal which has power itself in case of wealth & supporting destiny.

Consequence Of Merit That Made Phra Anuruddha Never Experienced "Not Have". The Lord Buddha said that Phra Anuruddha had offered lanterns in the previous lifetimes so he was intelligent.

In a previous lifetime, He was born to be a poor, however, He offered alms to a Silent Buddha who just finished a meditative attainment and made a wish that he did not want to experience "Not Have" anymore. After that He became a rich man and when he passed away, he was reborn as King Indara for 7 times, the Great Emperor for 14 times, made thousands of lanterns to worship a pagoda in which relics of Padumutara Buddha contained and a pagoda in which relics of Kassapa Buddha contained too. In this lifetime, he was born as a prince. When he was ordained, he learned the meditation from Phra Sariputta and then went to a forest.

Pratyekabuddha's Blessing & Buddha's Praising. Phra Anuruddha who was blessed by Pratyekabuddha to be the most lucky person will never experience "Not Have". Moreover, he also was praised by Buddha to be the most excellent in the area "Celestial-Eye"better than any other monk because he always spend time all day all night except meal times for practicing meditation and using his Celestial-Eye to examine the world beings & help living creatures on the earth.

Moreover, he was a Buddhist monk who was intelligent and knew Dhamma Vinaya thoroughly also. For the outstanding posture of Phra Anuruddha, Phra Arjarn O compared his "Meditation" that is almost 24 hours per day into the posture of a monk who is sitting half-asleep & bending down the head a little bit. His hands are interlacing placing relaxedly while, his back still stand upright which means he still has full consciousness, fully aware of every inspiration and expiration.

The Important Teacher Of "18 Revelations". "Phra Anuruddha" is not only has the powerful "Celestial-Eye" but, he is an important teacher of "18 Revelations magic subject" also because there is a phrase that mentioned his name in the first chapter of mantra. "18 Revelations" the great magic which can change bad thing to be good thing or even bless the water to be holy water for clearing bad thing out of body by bathing and drinking. Moreover, this subject was used to upgrade the destiny of a person to be superior level also.

"18 Revelations holy water" like as the water of Buddha's power which the prayer can use as concentrated holy water to mix with water for clearing bad things or supporting luck by drinking and bathing. When the bad things were washed out of body, good things will come instead. Blesssing ceremony on auspicious time "Sao 5" (March 28, 2020) According to the ancient belief, Saturn is the planet of impregnability and power so, whatever ceremony happen in "Sao 5" day will be very powerful and effective rather than general days. This auspicious time will make amulets have more power in case of invulnerability and protection. For the blessing ceremony on "Sao 5" this year is very special, Phra Arjarn O specially invited the power of "Hevajra (Pramasuan)" or "Yidams" to bless every piece of amulet in the ceremony.

Moreover, Phra Arjarn O also used holy spell to bless this coin together with the special breathing meditation technique named "Asmita" that "Arjarn Atthanij Pokkasab" is the person who pass on this knowledge. Therefore, Phra Arjarn O guaranteed that this "Phra Anuruddha Sao 5" including others amulet in "Sao 5" ceremony are very powerful likes never happened before.

The result may different for each person. Return item(s) accepted if the item(s) received is significantly different from description. This item is in the category "Antiques\Asian Antiques\Southeast Asia\Amulets". The seller is "amulets6395" and is located in this country: TH. This item can be shipped worldwide.