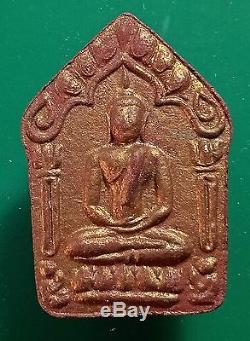 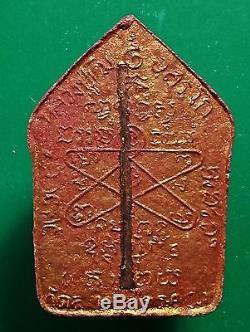 This is a Khun Paen Phong Prai Kuman embed 1 trakrud Mahaprab. Back are Yantra 5 image with takrut. LP Tim is one of the most famous and sacred Thai monk in Thailand. He is very famous for his Khun Paen and Phra Pidta buddha.

Luck, happiness and good handle with relationship and family. Life protection, harmony and dealing with people. Luang Phoo Tim was born in Ban Hua Tunnttabuon, Tambon Laharn, Ampher Bannkaii, Jungwat Rayong on the 16th June BE 2422 in the year of the Rabbit. He was named Tim, and his family name was Ngamsii.

At the age of 17 his father, Kheh, sent to Tan Phor Singh to study, returning home at the age of 19 and was ordained as a monk at Wat Thatkaow on the 7th June BE 2499. He was ordained by Phrakru Kaow, Archan Singh and Archan Kehh and was given the religious name of Issaliko.

After spending a year in Wat Thatkaow, he retreated in the forest for a period of three years, after which he went to Wat Narmathom in Changwat Chonburi for two years. Luang Phor Tim learned Wijja (magic) with Ajahan Lod, Ajahn Lem and Ajahn Saii.

He also studied with his Uncle Luang Phor Song Thao of Wat Kongchin. It was from this uncle that Luang phor Tim inherited a book of Wicha and Arkom. Luang Phor Tim became the Abbot of Wat Lahanrai where he was a strict and diligent practitioner of the Dhamma. He was known to be a very good monk and possessed few worldly materials. In the hut where he stayed, he only had a pillow and a mat with no electricity.

(due to its postal service). We will offer proper arrangement and help to resolve.

If you have any questions, we will reply you within 24 hours. The item "Phra Khun Paen Embed 1 Takrud LP Tim Wat Lahanrai b. 2515 Thai Buddha Amulet" is in sale since Saturday, November 19, 2016.

This item is in the category "Antiques\Asian Antiques\Southeast Asia\Amulets". The seller is "chokedeeamulet_th" and is located in Klongluang, Pathum Thani - . This item can be shipped worldwide.