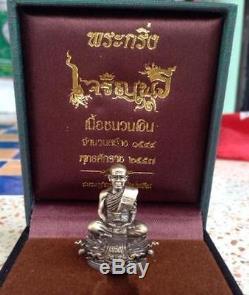 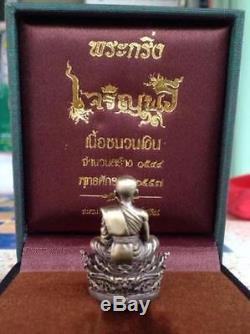 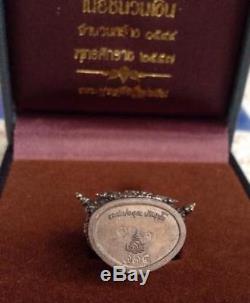 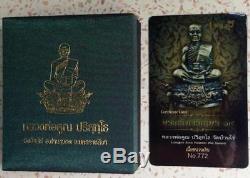 The amulet have a lot ceremony and sacred holy spell and sculpt temple code in Thai number (772). The Holy Monk - Luang Phor Koon Paritsuttho. Luang Phor Koon (LP Koon) was born on 4th day of October in 1923 B.

His mother died when he was at the age of 11. LP Koon was then taken care by his aunties.

Not so long after his mother death, his father remarried and LP Koon was sent to Wat Ban Rai to study Buddhism. During the day, he helped his father to plough the field, fed and bathed the buffalo, At night, he went to the temple to study and help to clean up the temple during his spare time. LP Koon was ordained as a monk at the age of 21 at Wat Thanon HatYai on May in 1944 B. Phra Kru Wijahn Dtigit was the preceptor and Phra Kru Atigahn Torng Suk was his dhamma teacher.

His monk's name is called Paritsuttho. During the year, at the summer observation vacation, he went to Wat Nongpho to learn meditation under the master Luang Phor Daeng (LP Daeng), and further his studies on Buddhist knowledge.

After several years, through his exceptional intelligence, he had studied almost everything from LP Daeng, such as Dhamma, Samadhi and Wichah (magic). Then LP Daeng told him.

You have now acquired a firm foundation against basic meditation and the Sanskrit language, and it is time for you to seek for other renowned master to further your knowledge. He introduced a high ranking monk to LP Koon known as Luang Phor Khang (LP Khang).

When LP Khang met LP Koon he could immediately tell that LP Koon was a very unusual monk and will have a bright future ahead and accepted him as his disciple. LP Koon learnt to cultivate Buddhist practice as well as all forms of spiritual powers from LP Khang.

In the course of his studies, he had to climb over mountains and enter the forest to practice the spiritual powers on remote mountain peaks. Three years went by, when LP Koon had learnt up everything, he left his master LP Khang and decided to go on his own to fulfill the Buddhism faith and help the needy. Wherever he goes he was well respected monk by the villagers. Later on, LP Koon meet with LP Kong, a. Monk while LP Kong went Thudong he will brought LP Koon along. Besides Dhamma and Samadhi, LP Kong also taught LP Koon with magic chanting and inserting takrut. After learning from LP Kong for sometime, LP Koon went Thudong alone as far as Laos, Cambodia and other places in the Northeast and stayed in the forests for many years. One day when LP Koon went Thudong and reached a mountain border between Thailand and Laos, the mountain area was very strange and surrounded with unusual weird looking trees. On that evening, several woodcutters were seen rushing down the mountain.

LP Koon enquired about it and come to know that the mountain was previously a Kingdom. Due to the fact that many had died there, a lot of grievance spirits roam out at night to cause harm and disturbances to the villagers. All the villagers were in fear and nobody dare to enter or stay on the mountain in the night. The woodcutters advised LP Koon to leave the mountain as many monks had encountered misfortunes. Since there are many grievance spirits in the mountain, as a monk I have an obligation to help them and hope to take them out from their realms of suffering.

The woodcutters remain silent and thought that they would have to return the next day to collect his dead body. The crying sound became louder as the wind blows stronger.

At that time, LP Koon keep on chanting mantras and suddenly a bright yellow light come down and enshrined his tent. The surrounding trees were swaying heavily from side to side and it seen to wind up the tent of LP Koon. Even the trees that were about to fall on his tent are expelled by the yellow light.

LP Koon keep on concentrate with meditation inside the tent. The evil windstorm stop eventually, many trees was felled but LP Koon remained unhurt. The evil spirit was dissatisfied with LP Koon and wondered why this yellow robe guy could not be hurt. LP Koon then used his spiritual power and talk to the spirits, Im here for you and I wanted to help you relieve from suffering in this human world.

Suddenly there were a large number of ghost rising up and stand in front of LP Koon. Among them is the King of ghosts in the mountain. When the ghost King saw LP Koon he knelt down before him. Than the King was asked by LP Koon, why he had not taken a reincarnation and the ghost King replied that the mountain was once a Royal Kingdom and he was the King.

The people of the Kingdom lived a peaceful and a happy life. It happened one day, the whole Kingdom was infected with contagious disease, all the villagers are killed by the infectious disease causing the death of hundreds of thousands that spread to them. Due to the fact that were a treasured been passed down by the ancestors, the spirits were there to kept guard over the treasured by prohibited any outsiders from taking away. Anybody who come to the mountain will be die or punished eventually. After LP Koon heard the conclusion of the whole matter, he advised on the Buddhist philosophy to convince the ghost and said, Since everybody had died and the body in the physical form had perished, all the treasures were of no use anymore as they cannot be worn.

What is the use of possessing them? Moreover, you all have killed so many people especially those in yellow robe who were observing the precepts, how long will the revenge end? Put off the evil thoughts and embrace Buddha! All of you must know that birth, aging, sickness and death are the cosmic law of Samsara and everybody has to face such a law and no one can avoid, not even the Buddha himself.

All of you will have to suffer from the effect of Samsara and the retribution for all the evil deeds caused and can never take reincarnation if evil acts are continued. The ghost King kept silence and asked LP Koon, Do we have the chance to repent?

Of course, previously you have done so much evil deeds harmed and killed many innocent people, although you repent now, all of you should also face the retribution for your past misdeeds as everyone is equal under the concept of karma. The good deeds will be rewarded and the wrongdoings will be punished. All of you will suffer the retribution of Samsara and will be born in the animal realm in the next life. The ghost King was so touched and impressed with LP Koon words. He offered three bows to LP Koon in appreciation and said with sincerity.

We hope that LP Koon will help us from the ghosts realm to attain the fruit of Buddhahood. We are not afraid to be rebirth in the animal realm. LP Koon put his palms together and chanted prayers on deliverance.

The chanted prayers were able to clear all the cycle of Samsara. The villagers began to enter the mountain for cutting wood and plough lands.

During the rainy season, LP Koon will stayed in any of the temple near town to Khow Pansah (rainy season for a monk to stay indoors), if he was still in the forest, he would stay in the forest and continue his Thudong. You are always out to dedicate the Buddhist faith, why dont you consider developing a temple in our own village?

The temple in the village is in bad condition and so run-down and the monks here do not have a decent place to chant their prayers. With the advice given by his grandmother, LP Koon decided to stay back and determine to develop and rebuild the temple in his village. LP Koon than found a suitable area and set up his tent under a tree. After a process of purification, he started to meditate and chant prayers inside his tent. In the middle of the night, a strange wind occurred and in the course of it, he than heard a voice crying in the wilderness and the sound is getting nearer and nearer to him.

Later he heard a voice speaking to him, LP Koon listened and heard the grievance spirit said. Here you come again, the guy in yellow robe. You do not know how many of these guys with yellow robe had died here. You will experience death in a little while. LP Koon, then asked the villagers and his lay disciples to source for fund for the construction of the temple. At that time, when peoples know that LP Koon is constructing the temple, many devotees around every corner come forward to helped. When the temple was almost completed, LP Koon cast a lot of amulets and offered as a gifts to all devotees who had helped. LP Koon is one of the most famous and top guru monks in Thailand. For almost two decades, LP Koon chanted mystical incantation and inserted Takrut for devotees. LP Koon is very good in the Visha (magic) of inserting Takrut.

He would personally insert the Takrut into the arm of the devotees, these Takrut are very well proven to protect a person from accidents, Metta (kindess) and as well as Kong Grapan (immunity from weapons). At that time, when peoples know that LP Koon is constructing a new temple, many devotees around every corner come forward to helped. The item "Phra Kring LP KOON Wat Banrai Temple Case Thai Buddha Amulets Wealth Lucky Rich" is in sale since Wednesday, December 21, 2016. This item is in the category "Collectibles\Religion & Spirituality\Buddhism\Amulets & Pendants".