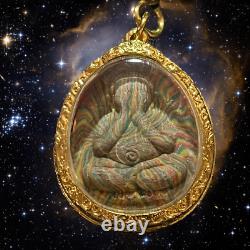 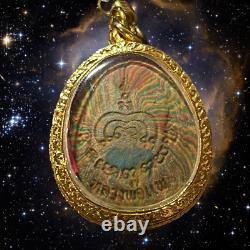 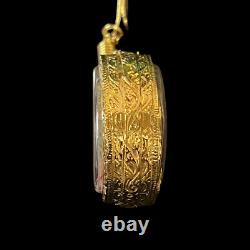 This is truly a beautiful Phra Pidta talisman amulet and a must have! It brings a lifetime of protection. If you believe in the holy magic of the Buddha be prepared for when good things begin to happen in your life if you own this amulet. The Legend of Phra Pidta. Phra Pidta, meaning closes or covers its eyes in Thai, also known as closed eyes Buddha.

There are few types of Phra Pidta in Thai, with four arms, six arms or fully covered with mantras. It is one of the favorite kind of Buddha amulets of Thai citizens.

Why Is Phra Pidta Holding His Hands Over His Eyes in Amulets? Hands over the eyes symbolizes a blocking out of the outside world during intense Sammabart meditation. This is jhana level meditation which can also cross-over into Abhinna. Abhinna are supernatural experiences which people meditating in the fourth Jhana can sometimes attain. Business prosperity is a major benet of this amulet. Yet, there are said to be many benets of the amulets including good luck and protection from harm of all sorts. Phra pidta closes his eyes, thus has the function to prevent villains. Phra Pidta was an apprentice of Buddha according to the legend. He had accumulated plenty blessings and virtues in his past lifetimes when he was still a human. During one of his past life, he practiced Buddhism with other monks.

At one night, the place was ooded and the monks were almost drowned. Buddha immediately sent Phra Pidta to stop the water ow and save the monks. From then on, men in heaven and the mortal were convinced of his ability and respected him. In his another past life, he always worshiped Buddha and eminent monks with fresh owers. While in another past life.

He was a child to a cattle raising family. In mornings, he often saw a mendicant monk meditating at a free ground. He knew it must be hard for the monk to meditate under hot sun.

Therefore, he set up a simple shed for the monk when he wasnt around, so that the monk can stay from hot sun and rain. All the good things he had done had made him promoted to the heaven. Phra Pidta had a handsome look and good karma.

Many worshipers loved him very much. Even some of them mistaken him for Buddha. These had become barriers to his practice. Rumors about female worshipers had better hospitality to him because of his handsome appearance were spread.

There was even saying he had aair with the female. Thus to avoid these rumors from spreading again, Phra Pidta used his supernatural power to change his outlook and became ugly, short or fat.

However, these couldnt change their enthusiasm to him. Therefore he closed his eyes in long time, ignoring peoples words and attitude, with all focus in his practice. Since then, Phra Pidtas facial image is made into the one we see now, covering his eyes signifying to cover up the six roots of sensations: eye, ear, nose, tongue, body and desire to free from human desires and passions. The six gunas: sight, sound, smell, taste, touch, and thought can keep one in mind the teachings of Buddha. Therefore, wearing Phra Pidta Buddha amulet can make ones mind more focused no matter on practicing Buddhism or thinking.

In mortal world, Phra Pidtas image is publicly known as posture of avoiding from disasters and dangers, keeping one safe from harm. It is also known for preventing villains.

Monks across Thailand have made Phra Pidta style amulets, the belowmentioned are some of the notable monks that have made powerful amulets. The item "Phra Pidta LP Gold Talisman Thai Buddha Amulet" is in sale since Saturday, October 23, 2021. This item is in the category "Antiques\Asian Antiques\Southeast Asia\Amulets".

The seller is "jsanes0" and is located in Randolph, Massachusetts. This item can be shipped to United States.