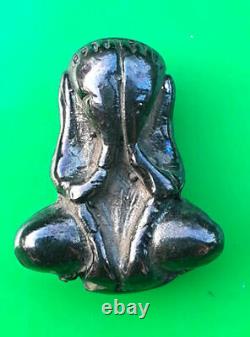 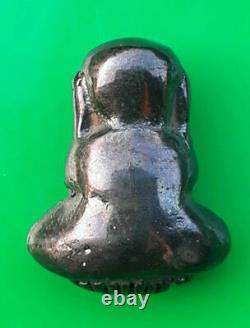 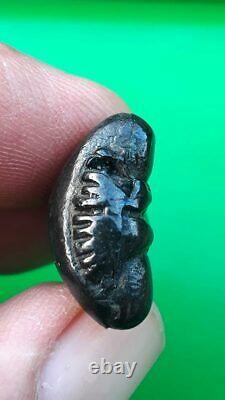 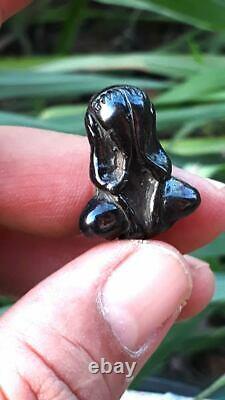 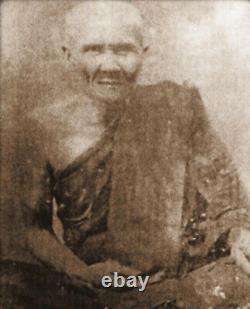 Mixing of minerals, molding, and pouring out the casting of the Lord was made by yourself. The Lord you cast out beautifully.

No seams Not bubbles The Buddha image is black and green. Shiny black color resembling insect wings, beautiful, unearthly, body texture, tight Perfect in shape. One of which Phra Phrom Phuk Phat of Luang Pu Bun that you create yourself, the texture will be the same. Luang Pu Nak's lot is wrong with Mek Phad meat, print lotus lotus leaf. And print blindfold that placed in the general field, which is a monk made from factory to consecrate later in the construction of Luang Pu Nak, he built many times together Keep building as there are opportunities. His eyes closed amulet, therefore, there are about 4-5 prints. Counted after, Phra Pid Ta Huay Crocodile is also aged One hundred years, you will see the uniqueness of Phra Pid Ta Huay Crocodile, in addition to being mainly seen in print. Phra Pid Ta Huay Crocodile has to be put on every body as well. In the installation of the sting, there is a story that Luang Pu Nak took the finished Buddha amulet to the sting at the side of the temple. When the master is finished, he will let the monk cover his eyes rising above the water with his disciples on the shore to collect. If any monk has closed his eyes, it does not float up in the water Showing that the closed eye Buddha image has no Buddhist power Which may have caused the character of a catastrophe from writing the character. Any master monk can dive into making sacred objects under water for a long time, this indicates that the Master Master. Successfully completed a field of agriculture that converts the element of water into a breathing space. In addition to the character of the Buddha image under the water Luang Pu Nak, you have another way of writing characters, that is You will go to spy in the middle of the field Or in the forest along a canal where there are many crab inhabitants, when you reach and find the holes He will stand with his right toe filling in the mouth of the crab hole. Then will determine the spiritual spirituality of spells And went down the sting at the same time throughout the field And the forest along the canal will be silent immediately, the sound of birds or insects will not be heard. All the animals in the area would be completely stunned. When you are done relaxing and determining your mind from writing characters Everything will return to normal Before returning to Luang Pu Nak, he will make holy water on that hole to relieve the magic. Otherwise, the crab in the hole will not come out. Or if the crab is outside, it will not be able to go back down the hole either. The character you use is "Na Ganga" as the main character, because Luang Pu Nak has completed Apoksin.

Prime From this dark and magical building ritual Therefore making the Phra Pid Ta Huai Crocodile is the emperor of all the Clouds closed eyes But Phra Pidtai Huay Crocodile is not only a variety of clouds. But there is also a type that is built with "Beef Chin" as well, which Phra Pid Ta Huai Khorat, Nuea Chin is a "Chin Takua" by.

Reverend Grandfather Nak, you take the lead sheet into the character and melt it into the closed eye monk And put on the sting with the same process Mention of Phra Pid Ta Huai, Crocodile meat, Chin Takua was built in the early days. It is a blindfolded Buddha amulet that Luang Pu Nak has created before he has successfully created the cloud. But in playing for Phra Pid Ta Huai, crocodile meat, Chotco is cheaper than Cloud Pho. 1898, Luang Pu Nakchotiko moved from Wat Phra Pathom Chedi. To build Huay Crocodile Temple In order to be a family temple of Phra Pathom Chedi According to the royal initiative of King Mongkut, King Rama IV, the area is overgrown forest. There are abundant wildlife The creek has a lot of crocodiles. Along the chedi worship canal This is a historic canal that His Highness had been dug in 1864 to connect with the Nakhon Chai Si River.

To be a way to worship Phra Pathom Chedi on the stream Luang Pu Nak took 3 years to successfully build the temple. Received the royal title by King Chulachomklao Rama V of Rattanakosin on July 9, 2443 by the name of "Wat Huay Crocodile" Luang Pu Nak Classified as the patriarch of Nakhon Pathom in the first time Is the original source of the Buddha image His Majesty King Rama VI and Krom Phraya Damrong Rajanupab When he was on his way to stay at Sanam Chan Palace Must pay homage to Luang Pu Nak regularly And Reverend Grandfather Nak gave both his eyes closed. To worship the Lord Buddha with Luang Pu Nak Chotiko was the creator of Huai Crocodile Temple with the people. Ruled the temple for 11 years, until the year 1910 with old age of 95 years old disease 74 years before Luang Pu Naga died. Has conveyed the academic creation of a blindfolded Buddha image to "Luang Pu Suk" his disciple, who later Luang Pu Suk was the abbot of Wat Huai Chorakha after Luang Pu Nak.

This Luang Pu Suk is also the famous monk of Nakhon Pathom, about the same time as "Luang Pho Cham, Ta Kong Temple" and "Luang Pho Noi, Wat Thammasala" who are also highly respected. Luang Pu Suk Than created a closed eye Buddha image in the for of a cloud type in the same pattern as Luang Pu Nak. But he did not put on a spy to. Phutthakhun which has been passed down. Phutthakhun in this coin is outstanding in mercy, great popularity.

Importantly is complacency of customer. When you received item with satisfied.

If you have any problem. We can solve your problem for better. The item "Phra Pidta Mekapad LP. Nak Huayjakae Temple Thai Amulet Thailand Buddha Pendant" is in sale since Thursday, November 5, 2020. This item is in the category "Antiques\Asian Antiques\Southeast Asia\Amulets".asia" and is located in Mueang Nakhon Pathom, Nakhon Pathom - . This item can be shipped worldwide.