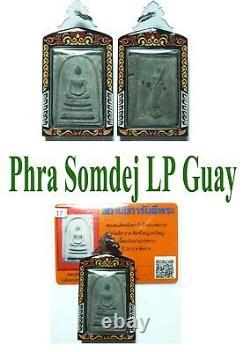 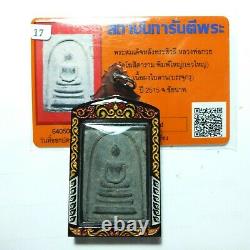 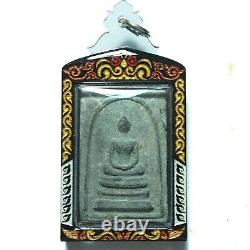 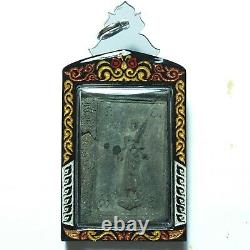 Luang Phor Kuay was born on November 2nd B. 2448, in Bankae Village, Sunbury District, Chainat Province. His parents were known as Mr. LP Kuay was one of 5 children.

Mr Tu Punson, Mr Kad Punson, Mr Chuen Punson, Mrs nak Punson and Lunag Phor Kuay. All of Luang Phor Kuay's brothers and sisters have since passed away. He was the first born and loved very much by his parents, who sent him to be educated by Luang Phor Kuad at Wat Bankae.

At the age of 20 he was indeed ordained a monk by Phra Chainatmuni, Luang Phor Pa and Phra Ajahn Ring on July 5th, B. 2467 at Wat Bost, Chainat Province. He was also given the official name "Chutinataro", which in fact has a significant and very deep meaning and can loosely be translated as follows:This world is full of lust, passion and greed. He who wishes to be enlightened must free himself from all of them. LP Pae, Wat Pikulthong and 2..

LP kuay Wat koitaram as young monks. Sacred BookIt was recorded that Luang Phor Kuay had owned a book called "Kru Rang", which was full of sacred spells. It was said that only monks or ascetics had sufficient sacred power to open and read the volume.

Wat Kositaram, first kept by Luang Phor Kuay. This copy has never been opened and studied in any detail because of previous experiences of mysterious illness or disease associated with it.

Moreover he also learnt ancient Thai medical sciences from Luang Phor Ken of Wat Dongsetti Uthaitani Province, and in particular the science to help repair broken bones. Luang Phor Pumpum of Wat Nongtangoo, a friend of Luang Phor Kuay had said that Luang Phor Kuay was a true monk, who was never afraid of anything which resulted in him learning strong magic. Furthermore it was also said that Luang Phor Kuay had a magic mouth. If he made a prediction, in all likelihood it would be become true. Note: Monks, who were known to possess a magic mouth must not tell lies, otherwise power would be nullified. The Secret of the sacred book. Many people were obviously very inquisitive about where Lunag Phor Kuay obtained his scared book.

Some of his disciples actually revealed the story to us. Luang Phor Kuay had never expected that he would gain the book but on June 1, B.

2477, he was staying at Wat Nongkam, Chainat Province where he was learning higher level ancient Thai medical sciences. During that time a monk named Jam had told Luang Phor Kuay that he had found a book, which was hidden in a hole of a dead tree but he could not extract the book because sacred souls were preventing him from doing so.

Luang Phor Kuay was taken to see the book himself, whereupon he lit three incense sticks and prayed to the sacred souls If it is your desire that I own this book, burn the incense to completion. The sticks did not burn.

Again Luang Phor Kuay re-lit another three sticks and asked If You want me to own and use the book to help temples and people, burn the incense to completion. This time all of those sticks were quickly burnt and Luang Phor Kuay could easily extract the sacred manual. On reading book he found the paragraph which clearly stated that the book was not to be owned by laypeople unless the keeper and family were suffering from incurable disease or other calamity. At the time though, without modern communications, as many as 44,000 devotees visited the temple to request the sacred tattoo from Luang Phor Kuay. After Luang Phor Kuay had completed tattooing he focused his attention on creating sacred amulets, takruts, sacred knives, phra pim etc.

His amulets were highly respected by the worshippers as they are to this very day. Even criminals of the province highly respected Luang Phor Kuay and at that time whenever they passed his temple they would shoot once in the air to salute him.

Abbot of Wat Bangkae (KOSITARAM). Because of his virtues, it was not long after, on September 1st BE 2491, he was appointed abbot of Wat Bankae. (Kositaram) It was recorded that during World War II for example, B. 2484 Luang Phor Kuay had given away sacred amulets to many people, who wanted his amulets in particular to help protect themselves from weapons and bombs.

Apart from that Luang Phor Kuay was also a true monk who strictly followed Lord Buddha's teachings. During his stay at Wat Bankae he become very well known throughout the kingdom for his preaching about Lord Buddha's history including the sacred legend of Pravessundorn.

2472, Luang Phor Kuay begun to learn "Pariyatti Dharma"(high level of Lord Buddha's Dharma) at Wat WangkornShortly after he once again moved to Wat Phra Bhrang, Singburi Province. It was here that he was to learn magic sciences from Luang Phor Sri Viriyasopit, who in particular taught him higher level meditation and the science to create sacred rings. Indeed all of Luang Phor Kuay's sacred rings were carved with the Khmer sacred spell just as those of Luang Phor Sri. Old Rare And Beautiful Desing.

Prosper toBusiness Successful, Good Trade. Many Thanks For Visit Intersting And Support Us Oldsiam Stores. This item is in the category "Antiques\Asian Antiques\Southeast Asia\Amulets". The seller is "buddhasecret" and is located in this country: TH. This item can be shipped worldwide.