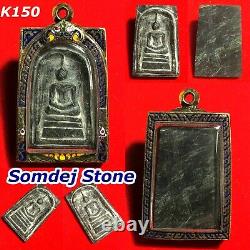 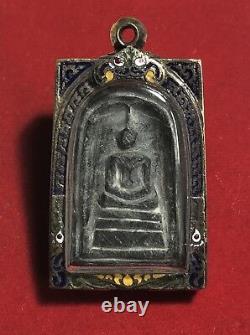 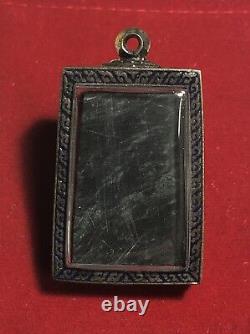 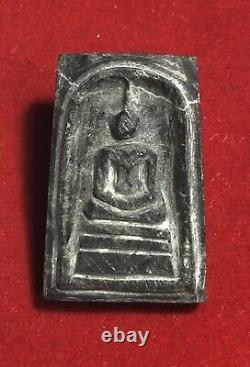 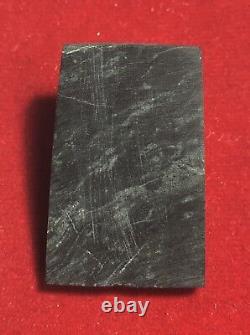 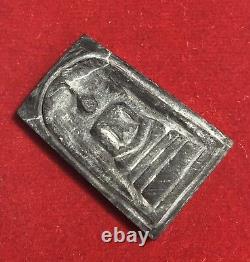 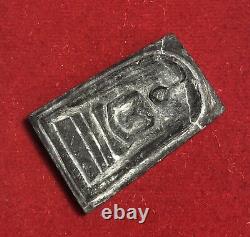 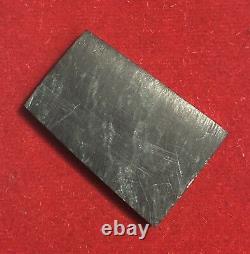 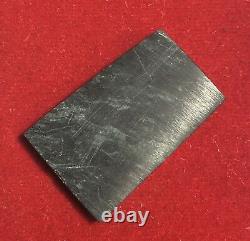 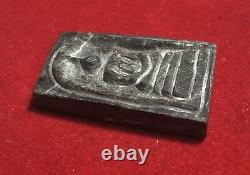 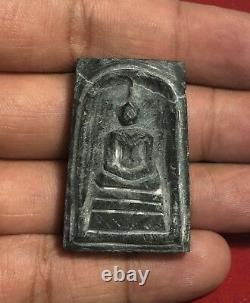 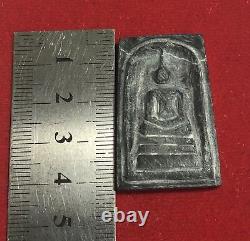 Welcome to Thai amulet for collectors. Phra Somdej Toh Wat Rakang is the best and most auspicious amulet in Thailand. Whoever possesses it is considered a great merit.

Has its own uniqueness It was also made with magic powder, which was considered new. (before it was made of clay or chin). Phra Somdej Phra Somdej Most of them are lime and mixed with Buddha's powder.

Is the powder of Maharat Itthijepatthamangtri Nisinghe, etc. By Chao Prakun Somdet To, the ancient method of making powder is written on the slate Written and erased to collect powder to create amulets. In addition, there are other powerful objects such as burned palm leaves, broken bricks, flowers for worshiping Buddha images, etc. All pounded together with Tang yew oil.

Beautiful, a fine piece for any collector, Worship, gifts for your loved ones. All amulets in my store come from temples around Thailand and amulet shops. For old amulets come from second hand amulet shops and collectors. For Thai people and many Asian people beleive thai amulet has a power for attraction fortune luck charm and can protect who wearing from danger and evil or changed bad things to good lucky. There have many Thai amulet created and chanting by thai monk or Ajarn which you can find here.

The only talisman that stands out and is said to have the most mysterious power among talismans. Phra Somdej is a powerful element to protect yourself and things that are close to you from dangers caused by "firearms" or "sharp objects" and "arms" of all kinds.

Life is immortal and very hard to find There must be a lot of rituals to get Phra Somdej. This Phra Somdej has 108 qualities as you wish. Whoever possesses it will have power, prestige over others. If you bring Phra Somdej with you There will only be safety and progress. Bring Good Lucky, Rich, Wealth, Fortune, Success, Good for Busine. Somdej Toh "Promrangsi", Rakhang Temple. Somdej Phra Buddhachan (Toh Brahma Rangsi) (Old name: Toh), or popularly known as "Somdet Toh", "Luang Pu Toh" or "Somdej Wat Rakang", is a Maha Nikaya monk.

Is an important Phra Maha Thera that is very popular and revered in Thailand. He used to be the abbot of Wat Rakang Kositaram.

Somdej Phra Buddhachan (Toh Phromrangsi) was born on Thursday, April 17, 1788. Luang Phor Toh was ordained as a novice at the age of 13 at Wat Yai Mueang Phichit. Later, he moved to study Phra Pariyat Dhamma in Chainat. When he was 18 years old, he moved to study with Ajarn Kaew, Bang Lamphu Temple, Bangkok.

He also studied Phra Pariyat Dhamma with Clerk Trang Duang, Khun Phrom Sena, Permanent Secretary, Krommanut, Clerk Boon and Phra Krasa. Later, he came to meet with Somdej Phra Luk Ya Tho Chao Fa Krom Luang Adisorn Sunthon, the Crown Prince, to come and live with the Supreme Patriarch of Wat Mahathat. Reverend Father Toh ordained as a monk in 1808, aged 21 years. Naga Luang by giving him ordination at Wat Ta Krai Phitsanulok Province whose mother and relatives are domiciled there and then come to stay with the Patriarch of Wat Mahathat.

Reverend Father Toh was the abbot of Wat Rakang when King Rama III passed away. Prince Thung Kham, who was ordained throughout the reign of King Rama 3 at Wat Bowon, was enthroned as the 4th reign of the Chakri dynasty. He has a royal command to be "Phra Thammakitti" was the abbot of Wat Rakang in 1852. He was not long in the position of abbot. By 1854, he was graciously pleased to be "Phra Thep Kawee". To be "Somdej Phra Buddhachan", the villagers generally call it "Somdej Puttajarn Toh, Rakang Temple" called and called, leaving only "Somdej Toh" at the end, while graciously His Majesty was 78 years old, 56 years old. Luang Phor Toh died on Saturday, June 22, 1872, around 24.00, on the main pavilion of Wat Inworawihan, Bang Khun Phrom. Phra Somdej Wat Rakang Constructed as a meditation Buddha image by Somdej Puttajarn Toh. Brahma Rangsri from Wat Rakang Kositaram The most powerful amulet that has been consecrated and is the best and most famous amulet in Thailand This amulet was created by Somdej Phra Buddhachan (Toh Promrangsi), Abbot of Wat Rakang Kositaram. Luang Phor Toh has created a sacred object. The main objects used to create a talisman are lemon peel mixed with world and other powders, added with other powders, powdered petals, oils, and holy water. Included are amulets printed Phra Somdet from around the year 1863 to 1872, which is called "Somdej Wat Rakang" that is famous throughout the country.

Somdej Phra Buddhachan (Toh Phromrangsi) was a guru who was the northernmost master in the Chakri Dynasty. Luang Phor Toh completed the course "Sarata Solo", which only a handful of people in Thailand could do. Luang Phor Toh has created Phra Somdet as a sacred object that has shown great supernatural powers. Phra Somdej is so great that it is popular among the general public.

This amulet is proven by many by constant financial success, Good health, protection, trading, success, good romance, good spirits, and many amulets. Luang Phor Toh amulet Made from 5 kinds of holy powder which are. These five rare ingredients were added to the substance used to make the amulet. It is a symbol of A blend of five divine ingredients. Somdej Wat Rakang It is known for its divine power to bring goodwill and goodwill from face the people and dispel all dangers and malices.

Phra Somdej Wat Rakhang If you wear it every day will see good changes in life, financial situation, business and prosperity. Is any object that is imbued with protective powers, and all cultures have manifestations of such objects. In the world of Thailand amulet, Many people believe the symbol of Load buddha has the power to ward off evil.

The most efficacious amulet & talismans are those that are inscribed with prayers that remind people to lord Buddha and his narratives. PHRA-SOMDEJ is name of Buddha seated on 3 row seat Amulet of Enlightenment and Prosperity. Material: These PHRA-SOMDEJ talismans have been created from a combination of more than 100 different types of soil and spiritual materials. These materials have been treated and combined with the power of 9 spiritual incantations, 9 ceremonies, and 9 temple blessings. These talismans are rare and difficult to find.

The PHRA-SOMDEJ talismans are engraved by a series of magical alphabet seals that enhance its power. Function: The power of the Buddha is linked to the tremendous enlightenment that he experienced while in the body. PHRA-SOMDEJ talisman is one of two that we have been able to procure. In Thailand, some of these PHRA-SOMDEJ amulets sell higher price.

The secret to their power is their ability to channel the energy of the primordial world into the life of the user. Good fortune, protection from negative forces, protection from demonic forces, enhancement of. Spiritual energy, and increase in the strength of the aura are the primary attributes of these PHRA-SOMDEJ talismans. The PHRA-SOMDEJ talismans are conscious elementals.

They have an indwelling intelligence, consciousness, and power separate from that of the user. They are an active form of spiritual protection. It is very important that the owner should be treated each PHRA-SOMDEJ talisman with respect. There are no special prayers or mantras that accompany this PHRA-SOMDEJ talisman. It has already been empowered to protect its new owner. Ownership of the talisman may be transferred from one person to another, but the above rules must be observed by each owner. Pra Somdej - King of Thai amulets. The greatest Pra Somdej Amulets are officially recognized as coming from one (or all) of the Royal temples; Wat Gaes Chaiyo, Wat Hmai Bang Khun Prom, and of course last but not least, Wat Rakang Kositaram. Most of these amulets are given a Puttapisek blessing ceremony in the temple where they were made, but then travel to at least two or three of the other temples to be laid under the'Pra Pratan' (main Buddha statue in the shrine), and absorb the prayers of the Sangha (Monks), for further sacredness and power. Pra Somdej is one of the'Benja Pakee' official set of five national amulets of Thailand seen as the most sacred, desirable and representative of every region of Thailand. The Pra Somdej Amulet represents Central Thailand. Spells are idols to simulate the appearance of the Buddha, the saint, the pundits and the Philistines. As well as respecting the sacred faith of the common man. Thailand, from past to present believed. Spells can also help dispel distress fortune fortune to those who possess it. Votive amulet that will grace the field. Protection not to be harmed by the enemy.

Such grace sticky film on teeth stabbed him invulnerable. Cover and its powers In that time, the country is free from war for peace. The instructor or the knowledge to create amulets.

Amulet Amulet was probably chanted. Spells with grace Boutique towards immortality great charm to inherit Buddhism and is the anchor mind. If you have any problems, you can tell me always by message, i will resolve a problem for you, hope you happy. Please do not leave negative or neutral feedback before giving us a chance to resolve any problem you may have. This item is in the category "Antiques\Asian Antiques\Southeast Asia\Amulets". The seller is "suwitcha000" and is located in this country: TH. This item can be shipped worldwide.