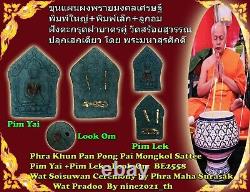 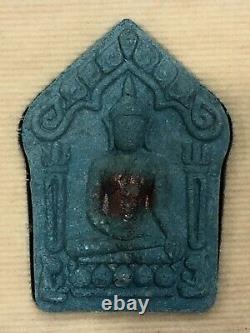 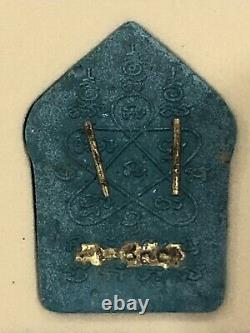 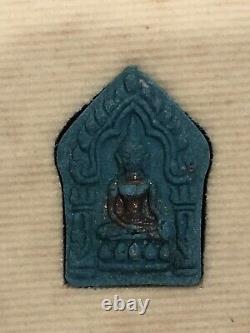 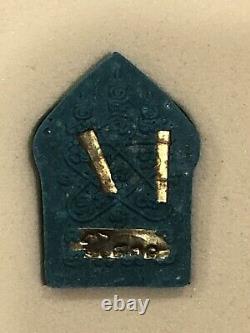 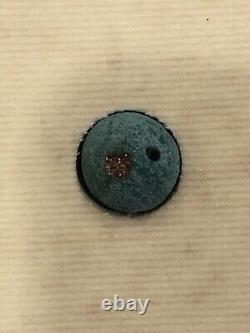 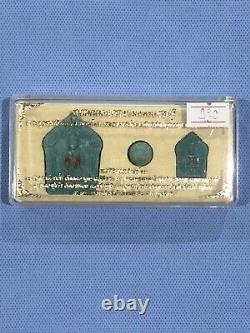 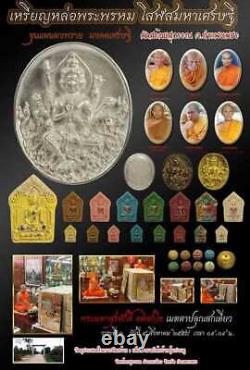 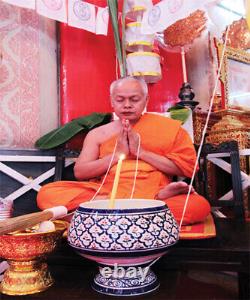 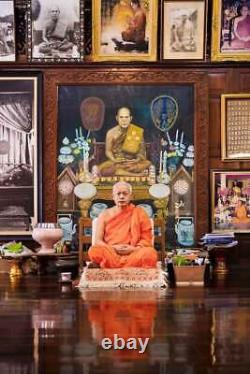 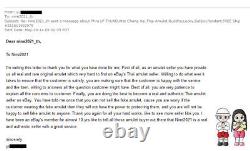 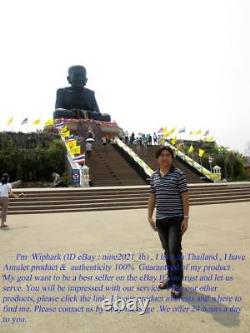 It is very rare and looks so beautiful, It will be one of the best in your collection. Power Of Buddha : Good Fortune & Prosperity.

He has 5 siblings in the womb, he is the third child. The family relocated to Amphawa District. Which is my father's house and attended 3 writing and reading classes, namely, Wat Chong Lom School Wat Pradu School and graduated Grade 7 at Wat Yai Samakkhi School.

The ordination date was March 12, 1976, at Wat Pachantaram, Samut Sakhon Province, with Phrakhru Samutthammasoontorn (Luang Por Sud, Kalong Temple) as his preceptor. Later, he took the ordination ceremony on July 10, 1983 at Wat Phatchantaram, Muang District, Samut Sakhon Province, with Somdej Phra Thirayanamuni. Wat Pathumkongka Ratchaworawihan, Bangkok as a preceptor, Phra Kru Sakorn Sutthikhun Former abbot of Wat Panchantaram as a monk and Phrakhru Niphat Worakarn (Pian Suwannapatumo), the former abbot of Wat Pradu, is a monk. After the ordination, he intends to study Pali Grammar in 1978 and is able to pass the Dharma Examination in the bachelor-master-doctoral level respectively.

1986 Able to pass the 5 sentence Dharma Examination at Pathumkongka Ratchaworawihan Temple School. With expertise in preaching, astrology, construction design Worshiping and inviting him to come to live in the Buddhist Lent Acting for the Abbot of Wat Pradu, 1991. 2011 Received a promotion to the rank of Phrakhru contracted the card, the abbot of Phra Aram Luang, first class in the royal name Phrakhru Phisanchariyaphirom.

He is also a developer Training youth in the community to be young tour guides bring the faithful to visit "Museum of the Royal Faith of His Majesty King Chulalongkorn, King Rama V" inside Pradu Temple. At the same time, it also encouraged the establishment of a learning center for the art and culture of mask making.

To be a source of learning and practice of making masks and heads of various teachers There is education, learning and demonstration without any prejudice. He is the one who laid the pattern for the development of temples to be clean, peaceful, shady and a source of learning local wisdom for the community. Which is a guideline for the project "The temple is the center of the community", therefore students, students, including those who have faith come to learn art and culture and pay homage to the Dharma conversation with him uninterruptedly.

Is a famous monk top level of the country He was a disciple of Luang Pu Chaeng. Sai Wat Klang Bang Kaeo, Luang Pu Jue, Luang Por Yod, etc. And studied subjects with many famous lay teachers. The sacred objects that you create are very popular. Both at home and abroad with those who use it and worship it for auspiciousness.

His Majesty King Maha Vajiralongkorn Phra Vajiraklaochaoyuhua Bodindradebayavarangkun His Majesty graciously His Majesty promoted the title On the occasion of the royal merit-making ceremony The birthday of His Majesty King Bhumibol Adulyadej Mahitalathibet Ramathibodi Chakri Naruebodinthorn Siamintharathirat Borommanatbophit December 5, 2016. In this regard, "Phra Khru Phisan Jariyapirom" or "Phra Maha Surasak Atisakkho" is a senior monk who has been graciously pleased.

To maintain the rank of an ordinary monarch in the royal name "Phra Phawana Wisuthisophon". All items are garanteed to be exactly as stated in the listing description.