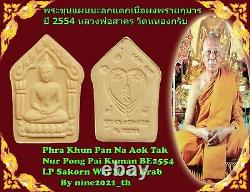 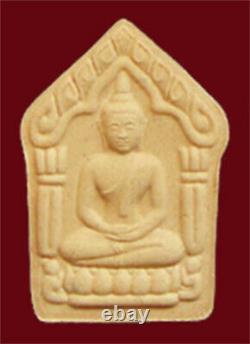 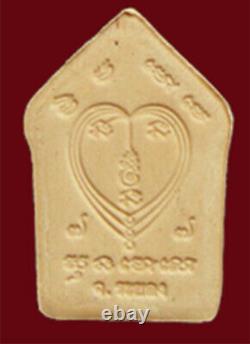 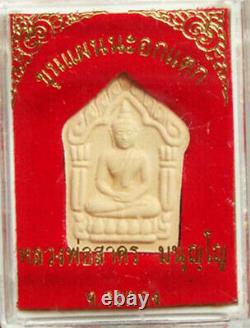 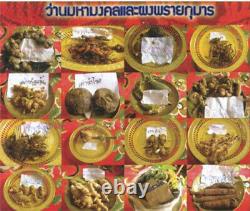 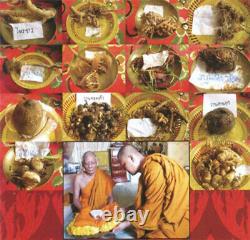 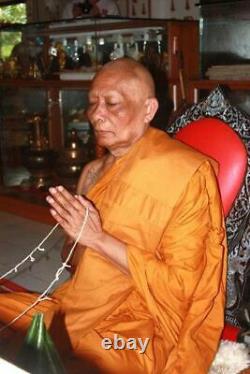 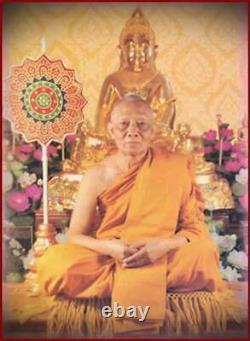 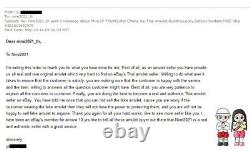 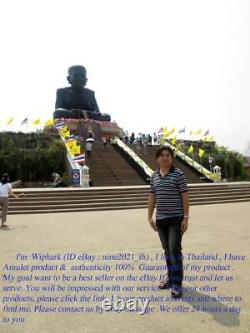 Generation : Na Aok Tak 2554. Sakorn Wat Nong Krub Rayong Thailand. It is very rare and looks so beautiful, It will be one of the best in your collection. THIS IS ANTIQUE UNIQUE THAI AMULET PENDANT FROM THAILAND. THIS WILL HELP THE OWNERS WHO DO GOOD TO GET GOOD AND BE HAPPY, LUCKY, WEALTH, LOVE, POWERFUL AND SAFE. IF YOU ARE LOOKING FOR ANTIQUE AND UNIQUE AMULET PENDANT BUDDHA SCULPTURE FOR YOUR COLLECTIBLE OR GIFT, THIS IS VERY BEAUTIFUL AND POWERFUL. Power Of Buddha : Good Fortune & Prosperity, Wealth Lucky Rich Love & Avoid from danger. History of Luang Phor Sakorn Manunyo, Wat Nong Krub, Rayong Province, Phra Kru Manun Thammawat or Luang Por Sakorn, a major disciple who inherited Puttakom from Luang Pu Tim Isrico.

The ancient plan since childhood. The original name was Sakorn Phaisalee.

Born in the family of farmers-farmers. On Tuesday, the ninth day of the 3rd lunar month, falls on February 3, 1938, which corresponds to the ancient motto that a person will have a special in themselves.

If adhered to, it will find success, more and more. If bad, it will be incomparably bad and the person born. In this sign, the mind is focused on superstitions, magic and witchcraft. When he turned 20 years old, his mother and relatives jointly arranged the ordination ceremony as a monk at Wat Nong Krap on Wednesday, June 4, 1958, with Phra Kru Chantarothai (Luang Por Ding) as the preceptor. Phrakarma of the teacher and the rector Wat Phai Lom is a monument Received the nickname "Manunyo" when ordained and then traveled to the Lent at Wat Lahan Rai and deposited himself as a disciple.

Luang Phor Sakorn, Wat Nong Krub, has been passed on the magic skills from many guru monks such as. In 1960, he traveled to study with Ajarn Chiang Kham. 1963: Studying with Ajarn Sin, Na Wang Temple, Bang Lamung District, Chonburi.

Luang Pu Tim allowed Luang Por Sakorn to become the abbot of Wat Nong Krub. Since then, although Luang Pho Sakorn, who came to be the abbot of Wat Nong Krab, has not abandoned him. Luang Pu Tim, the teacher, continued to pay homage to Luang Pu until Luang Pu Tim passed away in 1975. Reverend Father Tim Sakorn is also a major contributor to the funeral service of Luang Pu Tim, fully worthy of being a true disciple until the other disciples of Luang Pu Tim praised Luang Pu Sakorn all over Luang Pho Sakorn. Will be interested in studying various magic subjects and he did not abandon in the study of the Dharma and Discipline.

And when taking the position of the abbot of Wat Nong Krap, which is an older temple that is older 200 years and used to be burned by fire Sangha until he was sick, he did not look at it. When he became the abbot, he renovated and built a new sanctuary for the monks. Novices and Buddhists continue to practice their religion. Another special ability of Luang Por. Is skilled in sculpture and fine arts, carving, pattern molding and wall painting. As well as lacquering and gilding He therefore proceeded to renovate and construct permanent objects by himself. Luang Phor Sakorn Manunyo of Wat Nong Krap is considered another diamond that people respect and respect. He is a monk who inherits the magic from Luang Pu Tim who is a teacher without fail. Luang Pho Sakorn, Nong Krab Temple, passed away around midnight on September 18, 2013.

All items are garanteed to be exactly as stated in the listing description. Please feel free to contact me if you have any questions. My goal is to satisfy each and every customer. Be sure to add me to your favorites list!

Check out my other items & adding my product to your Favorites.. This item is in the category "Antiques\Asian Antiques\Southeast Asia\Amulets". The seller is "nine2021_th" and is located in this country: TH. This item can be shipped worldwide.