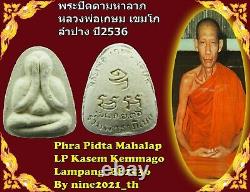 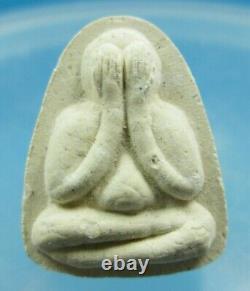 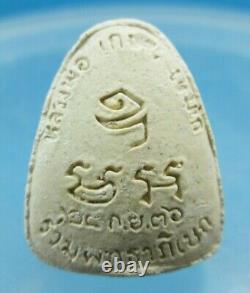 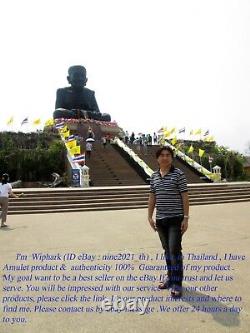 Phra Pidta Mahalap LP Kasem Kemmako. Lucky Rich Lucky Rich Lucky Rich. It is very rare and looks so beautiful, It will be one of the best in your collection. Genuine, authentic, collectible Thai amulet. Attract love and kindness to you From Every People. Attract Lucky and Fortune, Property Very rich wealthy attract Prosper to Business ability, Very profitable trade. Bring success in every aspects of life. There are many people like this uniform. Happiness and auspicious to life. Will come to you Success and Lucky For you Best gift or present for your love one.

Power Of Buddha : Good Fortune & Prosperity. Ealth Lucky Rich & Avoid from danger. History of LP Kasem Kemmako Susan Trirat Lampang Thailand. In the land of Lanna in the north of Thailand The noble monk who we all know the reputation of his virtues is Kruba Sriwichai. The first noble monk of the North, he is like a big lamp that illuminates the Dharma in every direction.

While you are alive You have done many good things in this land. He was therefore considered an important person in the history of the northern people.

His history and stories are thus recorded for future generations to be aware of in the present day. Some history of Kruba Srivijaya in one episode said that Kruba Sriwichai had prophesied that he would have merit to be born in Lampang. Later, Kruba Sriwichai passed away, leaving this prophecy for the people of Lampang to look forward to the advent of his merit. That Kruba Sriwichai had prophesied until many decades later still not appear But Lampang people still believe in the prophecy of Kruba Sriwichai. In 1912, there was a family of Chao Chao, the ruler of Lampang, or Khelang Nakhon in the past, the head of the family was Chao Noi Na Lampang, after changing his last name to Manee Arun, serving as the district deputy, his wife named Chao Mae Bua Jon at Lampang. Both are grandchildren of Chao Pho Boonwat Wongmanit, the last ruler of Lampang. This family set up a house at Ban Tha Kao Muang, along the Wang River, Muang District, Lampang Province. Finally, Goddess Bua Jon became pregnant and her due date was on November 28, 1912. On the Buddhist day of the Yi (Northern) month, the year of the Rat, R. 131, 1912, the goddess Bua-Chon gave birth to a male baby. Be the first child of the family. At that time, no one knew at all. The merit that Kruba Sriwichai had prophesied had already been born.

Everyone was called Chao Kasem Na Lampang after giving birth a few years ago. Goddess Bua Jon gave birth to another baby. But female Which has the dignity of Chao Kasem's younger brother, inherited the blood, but this little goddess, little luck Died at a young age Therefore, there is no chance to know that her brother is Ton Boon, whom Lampang people have been waiting for for ten years. As a child, Chao Kasem Na Lampang was a relatively small and fragile person. White but strong, agile and intelligent.

A naughty child is curious At school age, Chao Kasem Na Lampang received primary education at Boonthawong Anukul School. Which was a boarding school in Muang District, Lampang Province. At that time, it was only open to the highest grade of Primary 5 only. Chao Kasem Na Lampang studied until the end of the high school. Was the fifth grader in 1923, at that time he was 11 years old.

When leaving school, he did not study and stayed at home for 2 years. In 1925, when he was 13 years old, Chao Kasem Na Lampang had the opportunity to enter the umbrella of Kasawapat. Ordained as a novice On the occasion of ordination in front of the funeral (ordaining in front of the fire) of the Abbot of Wat Pa Dua After being ordained for only 7 days, he retired.

After another 2 years, around 1927, when he was 15 years old, Prince Kasem Na Lampang had the opportunity to enter the Rom Kasavapat again. Ordained as a novice at Wat Boon Yuen, Lampang Province Novice Chao Kasem Na Lampang is a serious person. Studied in the field of Dharma study until 1931.

Novice Chao Kasem can pass the Master's Dharma exam When he was 21 years old, he was able to ordain as a monk. Therefore, he was ordained as a monk in the year 1932 at Phatthasima, Boonyuen Temple, with Phra Det Phra Dhammachinda Nayok (Faction) Archbishop of Wat Boonwat Vihara. Who held the position of preceptor at that time Venerable Phra Kru Uttara Wongthada or known by northern villagers as Kruba Panya Tong Tong Abbot of Wat Muenthet and held the position of Priest of the Mueang District Lampang Province at that time as a monk And also Phra Det Phra Than Phra Thammachindanayok (Unruen), the abbot of Wat Pa Dua, is a monument.

He was nicknamed Khemako, which means one who has good Dharma. After being ordained as a monk, Monk Kasem Khemko studied the Pali language. Which is another field of formal education at the office of Wat Sri Lom At that time, there were many teachers such as Maha Ta Kham, Phra Maha Mongkhon as a teacher.

And also went to study at the Bureau of Wat Boonwat Wihan with Phra Maha Moh Brahmawong and Phra Maha Kowit Kovitayano as teachers at the same time Monk Chao Kasem Khemko went to study in the Dharma Department at Chiang Rai Temple Bureau, the teacher who taught was Phra Det Phra Chao Khun Phra Thep Wisutsophon. Primate of Lampang Province at that time It turns out that Monk Chao Kasem Khemko was able to take the first-class Dharma exam in 1936. As for the education of Bali He learned until he was able to write and translate into (Maha) very well, but he refused to take the qualification exam. Until all teachers understood that monks Kasem Khemako did not want to have a high rank, studying in order to apply the knowledge to be used in the study and research of the Buddha's teachings only. When it's successful in the proper way can be implemented without getting lost So he turned and continued to practice until he broke up. Monk Kasem Khemko sought out teachers who had knowledge and expertise in this field. Until I heard the news, a monk is famous for introspection. This monk is Kruba Kaen Sumano, former abbot of Wat Pratu Pong. Kruba Kaen Sumano was a Vipassana monk. Hold a pilgrimage Also known as Phra Pa or the official language called. Aranyawasee monks At that time, Kruba Kaen took a pilgrimage. All items are garanteed to be exactly as stated in the listing description. Please feel free to contact me if you have any questions. My goal is to satisfy each and every customer. Be sure to add me to your favorites list!

Check out my other items & adding my product to your Favorites.. Another product we have special price for you. This item is in the category "Antiques\Asian Antiques\Southeast Asia\Amulets".