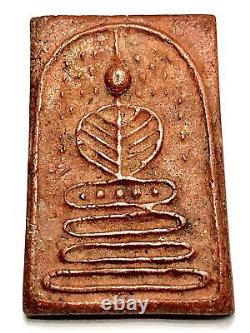 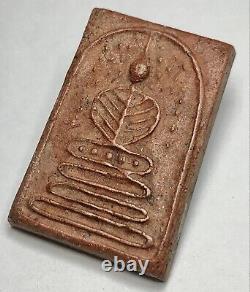 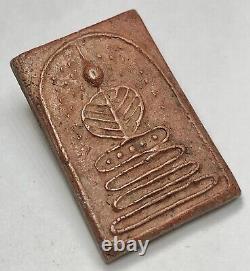 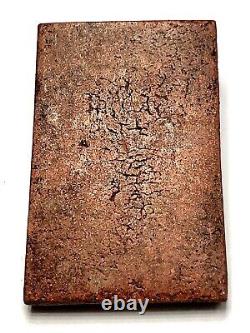 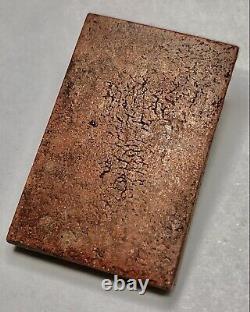 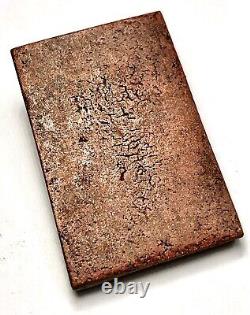 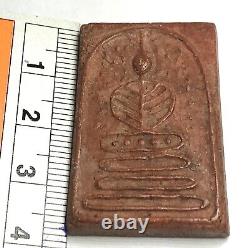 Welcome to Thai amulet for collectors. Phra Somdej Toh Wat Rakang is the best and most auspicious amulet in Thailand. Whoever possesses it is considered a great merit. Phra Somdej Lp Toh, Generation Phim Sendai. Create More Than 140 Years, Thai Buddha Amulet. Be the Phra Somdej thing that has the power, the life is good, a business is good. Name : Phra Somdej Lp Toh.

3.5 X 4.0 Cm(Approx). Somdej Phra Phutthachan (To Phrommarangsi), was one of the most famous Buddhist monks during Thailand's Rattanakosin Period and continues to be the most widely known monk in Thailand. He is widely revered in Thailand as a monk who is said to possess magical powers and his amulets are widely sought after.

His images and statues are some of the most widespread religious icons in Bangkok. Somdej To was born in Phra Nakhon Si Ayutthaya Province, the illegitimate son of King Rama I. He studied the Buddhist scriptures of the Pali Canon with several Buddhist masters. After becoming a well-known monk, he became the preceptor for Prince Mongkut, later King Rama IV, when Mongkut became a monk. During Rama IV's reign Somdet To was given the ceremonial name Somdet Phra Buddhacarya (To Brahmaramsi) by the King and used to be one of his trusted advisers, having left a lot of teaching stories around him and the King. He was noted for the skill of his preaching and his use of Thai poetry to reflect the beauty of Buddhism, and for making amulets called Somdej. The amulets were blessed by himself and other respected monks in Thailand. He also appears in many versions of the story of the ghost Mae Nak Phra Khanong, and he is said to be the one to finally subdue her. Somdet To also wrote the Jinapanjara, a protective magical incantation which is widely chanted and used by Thais.

Somdej Toh Wat Rakang was born in the year 2331 and became a Monk in the year 2350 and He passed away in the year 2415. Totaling 84 years of age and wearing yellow robes for a total of 64 years. The power of Buddhahood of Phra Somdej covers the whole universe. And is auspicious to those who have possession There are both great mercy, elusive, invincible. Prevents demons, plagues and brings good luck.

Complete happiness causes courage to ward off dangers, etc. The more those who hold the precepts, practice well. It will be a good protection power ever.

He used to be the abbot of Wat Rakang Kositaram. Somdej Phra Buddhachan (Toh Phromrangsi) was born on Thursday, April 17, 2331. Luang Phor Toh was ordained as a novice at the age of 13 at Wat Yai Mueang Phichit. Later, he moved to study Phra Pariyat Dhamma in Chainat. When he was 18 years old, he moved to study with Ajarn Kaew, Bang Lamphu Temple, Bangkok. He also studied Phra Pariyat Dhamma with Clerk Trang Duang, Khun Phrom Sena, Permanent Secretary, Krommanut, Clerk Boon and Phra Krasa. Later, he came to meet with Somdej Phra Luk Ya Tho Chao Fa Krom Luang Adisorn Sunthon, the Crown Prince, to come and live with the Supreme Patriarch of Wat Mahathat.

Reverend Father Toh ordained as a monk in 2351, aged 21 years. Naga Luang by giving him ordination at Wat Ta Krai Phitsanulok Province whose mother and relatives are domiciled there and then come to stay with the Patriarch of Wat Mahathat. Reverend Father Toh was the abbot of Wat Rakang when King Rama III passed away.

Prince Thung Kham, who was ordained throughout the reign of King Rama 3 at Wat Bowon, was enthroned as the 4th reign of the Chakri dynasty. He has a royal command to be "Phra Thammakitti" was the abbot of Wat Rakang in 1852.

He was not long in the position of abbot. By 1854, he was graciously pleased to be "Phra Thep Kawee". To be "Somdej Phra Buddhachan", the villagers generally call it "Somdej Puttajarn Toh, Rakang Temple" called and called, leaving only "Somdej Toh" at the end, while graciously His Majesty was 84 years old, 64 years old. Luang Phor Toh died on Saturday, June 22, 2415, around 24.00, on the main pavilion of Wat Inworawihan, Bang Khun Phrom.

Phra Somdej Wat Rakang Constructed as a meditation Buddha image by Somdej Puttajarn Toh. Brahma Rangsri from Wat Rakang Kositaram The most powerful amulet that has been consecrated and is the best and most famous amulet in Thailand This amulet was created by Somdej Phra Buddhachan (Toh Promrangsi), Abbot of Wat Rakang Kositaram. Luang Phor Toh has created a sacred object. The main objects used to create a talisman are lemon peel mixed with world and other powders, added with other powders, powdered petals, oils, and holy water.

Included are amulets printed Phra Somdet from around the year 1863 to 1872, which is called "Somdej Wat Rakang" that is famous throughout the country. Somdej Phra Buddhachan (Toh Phromrangsi) was a guru who was the northernmost master in the Chakri Dynasty. Luang Phor Toh completed the course "Sarata Solo", which only a handful of people in Thailand could do. Luang Phor Toh has created Phra Somdet as a sacred object that has shown great supernatural powers. Phra Somdej is so great that it is popular among the general public. Phra Somdej Wat Rakhang, good texture. All amulet collectors named Phra Somdej "Top Amulet". Phra Somdej Wat Rakang It is the most powerful and fortunate monk that gives positive results, feelings and wealth. This amulet is proven by many by constant financial success, Good health, protection, trading, success, good romance, good spirits, and many amulets. Luang Phor Toh amulet Made from 5 kinds of holy powder which are. These five rare ingredients were added to the substance used to make the amulet. It is a symbol of A blend of five divine ingredients. Somdej Wat Rakang It is known for its divine power to bring goodwill and goodwill from face the people and dispel all dangers and malices. Phra Somdej Wat Rakhang If you wear it every day will see good changes in life, financial situation, business and prosperity.

Is any object that is imbued with protective powers, and all cultures have manifestations of such objects. In the world of Thailand amulet, Many people believe the symbol of Load buddha has the power to ward off evil. That an object that is inscribed with the word of God, image of Lord buddha and religious narratives, symbol and signs, will protect the person who reads, touches, or sees it. The surface of an amulet and talismans object can be covered with prayers, signs, numbers, and decorative motifs, and the object is carried in a pocket, or rolled and placed in an amulet case; some talismans are worn as clothin. The most efficacious amulet & talismans are those that are inscribed with prayers that remind people to lord Buddha and his narratives.

PHRA-SOMDEJ is name of Buddha seated on 3 row seat Amulet of Enlightenment and Prosperity. Material: These PHRA-SOMDEJ talismans have been created from a combination of more than 100 different types of soil and spiritual materials. These materials have been treated and combined with the power of 9 spiritual incantations, 9 ceremonies, and 9 temple blessings. These talismans are rare and difficult to find. The PHRA-SOMDEJ talismans are engraved by a series of magical alphabet seals that enhance its power. Function: The power of the Buddha is linked to the tremendous enlightenment that he experienced while in the body.

They have an indwelling intelligence, consciousness, and power separate from that of the user. They are an active form of spiritual protection.

It has already been empowered to protect its new owner. Ownership of the talisman may be transferred from one person to another, but the above rules must be observed by each owner. Return PolicyIf you have any problems, you can tell me always by message, i will resolve a problem for you, hope you happy. Please do not leave negative or neutral feedback before giving us a chance to resolve any problem you may have. This item is in the category "Collectibles\Religion & Spirituality\Buddhism\Other Buddhism Collectibles".

The seller is "suwitcha000" and is located in this country: TH. This item can be shipped worldwide.