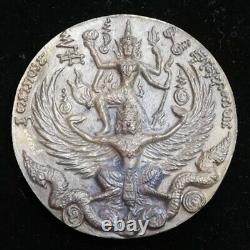 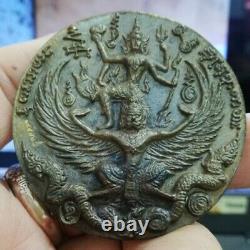 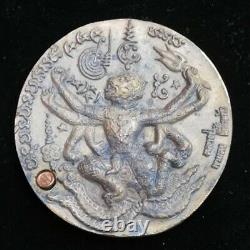 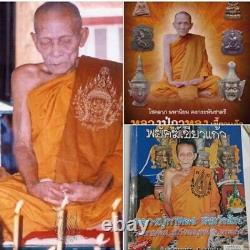 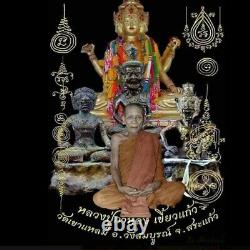 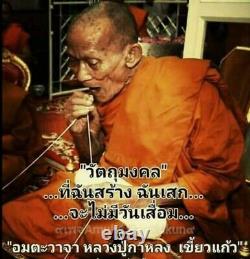 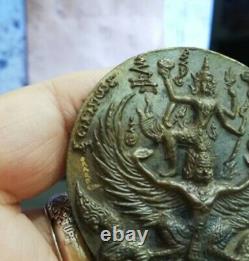 Thai Amulet Genuine Garuda Buddha pendant Talisman Lucky Rich Life Protect. Thai BuddhaTalisman genuine Amulet The Coin "Phra Narai Shong Khruth" LP Kalong. LP Kalong Wat KHAO LAM. Means that The Coin : he is a great power over the sky, above the ground, over the sheets of water. In front of Coin Phra Narai Stand on Garuda and Garuda. 8 hands show yawning energy as stars and moon. The power of this coin : protection against danger and accidents in all ten directions Protect from 4 elements of earth, water, wind, fire, as well as your occult and invading actions. It is the superpower, control the animal, control all the employees to respect the faith in us, be invulnerable, the flesh, the skin, dispel all the bad things, the evil, go far away.

This is talisman good luck charm. Thai people believes the image of Buddha have magic power and especially powerful in protecting the owner from evil forcesand misfortune. Who have this talisman or amulet can bring you happiness and protect dangerous and secure good fortune for the owner. Vishnu or Narai is a god in Brahmanism. It is said to have been created by Shiva by patting the left hand and the right hand.

Born to Vishnu, Vishnu has 4 acts. Each of them holds a bachelor, a staff, a chakra, and a conch. Vishnu has 4 wives, but after inconsistency, leaving only one Lakshmi. The legend of Narai the Garuda.

Due to the serpent (Phaya Wassurakit and his family) wanted to drink Amrit water so that he would not die at all. Entering a contract with Phaya Garuda (Phaya Suban) that if bringing Amarit to redeem the painting for Garuda and his mother, Garuda then stole the amulet to the serpent, but on the way he encountered Narayana standing in his way. A fight broke out and it appeared that they could not overcome each other. Therefore made a friendly contract with a bond between Phaya Suban and Narai. That is to say, when Narai goes wherever, there will be a Garuda as vehicle But if any time together, then Phaya Garuda is above Narai.

Is on the top of the flagpole of Vishnu. Garuda Buddha amulet Which gives you the fortune, trades, and power.

To recite this spell regularly. Complete 12 times according to the strength of Rahu. Gold-Gold Trustee Then pray for the things that are believed to be fulfilled as great acts of fortune, protection from escape. Prayer Rattling The legend of Narai the Garuda amulet.

The 7-headed Naga means Satu Deva, a partner and Rahu. Which turns bad into good With the power of Vishnu to defeat the evil force of Rahu Help support the fortunes of the occupants. For the history of Narai Song Garuda There is a story that King Jayavarman Of Khmer Kingdom He wears it on his right index finger when sitting on the throne. With the power of the Vishnu, it is believed that if used to create amulets Therefore has a powerful power in protection and prevention Is prosperous with honor and rank as auspicious, making you the master Dominating the enemy Beloved by those around him and his followers.

Vishnu has Garuda stamped on Rahu. Must be consistent with the bibliography In order to defeat the evil power of Rahu to affect To the horoscope of life Pay by installments Relieving bad punishment in accordance with astrology. Count for the first time The first model was designed to create auspicious objects with astrological patterns. To correct the evil powers of the stars, Rahu and Saturn There is a ceremonial ceremony performed by the power of the Buddha, Phra Prit, incantation, and worshiping according to ancient rituals. Most people who have to worship Narai Song Garuda Tend to be the person who works at the front row.

Such as department heads or owners because there are always obstacles. Suggestions for people at Bucha are Must have truth. Worship: Worship every Thursday or Buddha's day with fruit garlands. But incantation before praying Or before undertaking all activities. Prayer Rattling The legend of 5 Buddhas amulet.

NaMaMi - EiPutThaTho - NaMoPhutThaYa. I hereby proclaim the prestige of the 5 Buddhas. And Trimurti Vishnu with Garuda and Hanuman eighteen.

Families and animals from all disasters..... (and then pray as desired). We are not responsible for any wrong or undeliverable addresses. I will be sent by Thailand Post within.

Do not be afraid if you have a problem to ask. The item "Thai Amulet Genuine Garuda Buddha pendant Talisman Lucky Rich Life Protect" is in sale since Tuesday, October 8, 2019. This item is in the category "Antiques\Asian Antiques\Southeast Asia\Amulets". The seller is "laddpot_0" and is located in Phon Phisai. This item can be shipped worldwide.