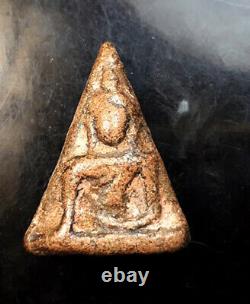 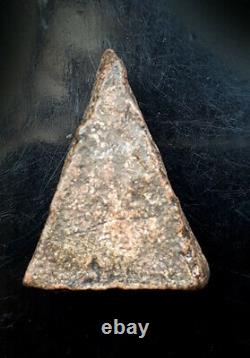 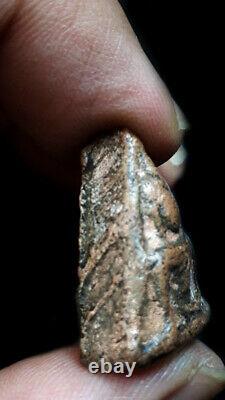 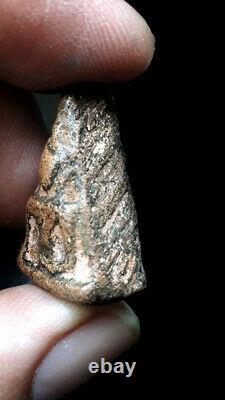 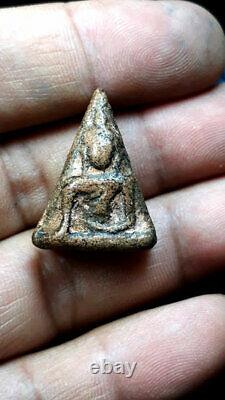 Quantity : Creating is very low and it is difficult to find. Thai buddha amulet is a talisman Of Thai people since ancient times, is a kind of Thai Buddhist blessed item. Used to raise funds to help build temples and chapels. After the donation, Thai Buddhist monk will give amulet as a gift to them.

With the change of time, amulet no longer simply means as a "gift" , but a kind of tool to help enhance luck in different aspects, some people use amulets to improve marriage, wealth, health, love and people relationship. It is also a tradition to place Thai amulets under stupa or other temple structure when it is built.

When the structure collapses, many amulets are found. Some can be dated back over a century. Almost every temple of Thailand Buddhist has at least one Thai amulets.

They have great respect for the Buddha. It is common to see young or elderly people wear amulets, or packaged by amulets around the neck in order to get closer to the Buddha. Amulets are made using the Buddha image, image of famous monk, or even image of the monks who made the amulets themselves and let believers wear on for security and peace. Amulets have different kind of sizes, different shapes and different materials such as plaster, bone, wood, metal. It may include ash from incenses or old temple structure, hair from famous monk, to add protection power to the amulets. After the amulets were made, the maker will then ask the monks who live in temples or monks from other temples join together and practice will, chant, pray and bless the amulets, this process may need at least one week more than five years. These amulet very famous and popular amulet among of professional Thai Amulet Collector. Was made in a small quantity and was considered as one of the most remarkable charms ever made in. The amulet was made from powerful material and Buddha's grace and believed to bring great. Fortune to the possessor when engaging in risky business such as lucky draws, lotteries, gambles etc. You used the amulet in a proper way. You will have great fortune and wealth. Many possessors could have a new car, new house, clear.

Their debts off while wearing this amulet. The amulet also has power and spirit to help possessor just like in the old time when was using the. The amulet has a high reputation in bringing Metta Maha Lap for the owner and vulnerable as well.

As ward away any dangers and bad spirits. Possessor will be loved by everyone around him or her and will. People will have compassion you.

If you have any problem. We can solve your problem for better. The item "Thai Ancient Amulet Magic Buddha Phra Nang Phaya, Kru Phitsanulok, Real Pendant" is in sale since Saturday, March 23, 2019. This item is in the category "Antiques\Asian Antiques\Southeast Asia\Amulets".asia" and is located in Mueang Nakhon Pathom, Nakhon Pathom - .