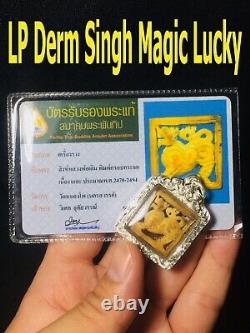 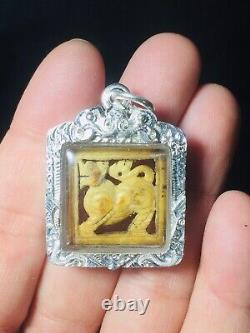 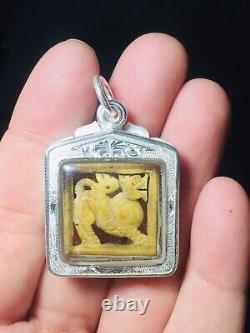 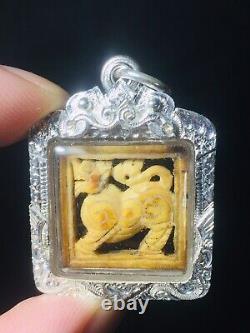 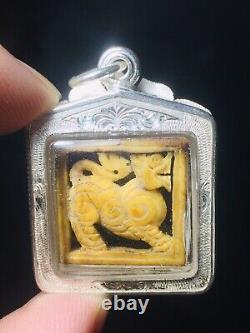 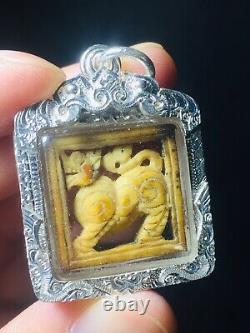 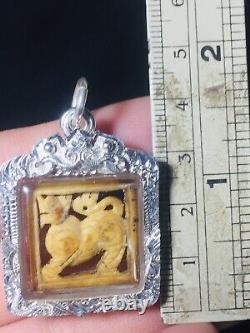 Made And Bless By Phra LP Derm BE 2482. His very well-known amulets are various kinds of tusk carved pieces including Singharajs, a few batches of statuettes of his own, and many sizes of magic knives. Because of his amulets carrying great properties on impenetrability, so they are best for "real men" who want to fight the bad. His magic knives are so terrible that magic-tattooed hooligans are scared of. Even the small-type knife is only 2-3 inches long but it could destroy enemies' invulnerability. The knife will easily penetrate into any magically invulnerable guy, and the wound is terribly incurable. His foot-prints are also popular amulets, its properties are comprehensively for self protection as same as his magic knives. As elephant being a carrier in the old times, Luang Phor Doem kept many elephants. He cast a spell on every elephant's legs and sometimes fed them with blessed grass. As a preceptor, Luang Phor Doem was often invited to many temples to preside over the ordain ceremony. When he was getting old, he reached the destination temples by elephant. All his elephants were very tamed.

After reaching the temple, Luang Phor Doem just let the elephant go freely to feed itself by eating grass in the nearby area. Amazingly, when the ceremony going to end with some chanting chapter, the elephant would go back by itself and kneeled down in front of the Bosth(main chanting hall for all Buddhistic rituals) to pick him up and bring him back to Wat NongPho. Luang Phor Doem loved all of his elephants, he had special knowledges(Yana) to detect elephants' mind and to communicate them. When Luang Phor Doem passed away, his elephants cried with grief and some of them refused to eat anything.

Luang Phor Doem was a great builder. He helped build more than 30 temples in Nakornsawan and nearby provinces, such as Phichit, Pitsanulok and Chainat. His benevolence was so great, he cared about the water in temple's pond which was the main blood vessel for all monks in the temple.

He was very happy if the pond was full of water. When the pond was shallow in the dry season, he was worried and going to the Bosth to meditate and beg for rain. The day he passed away, his monk disciples had told him that the water level was very low, it's nearly run out. If there was no rain in a few days, the pond would dry up.

Luang Phor Doem nodded his head while he was lying ill on the floor. "My sons I'm going to leave this world, I wish you all be good monks and be happy forever, so don't worry about the water in the pond", said he. A few minutes later, he passed away. Suddenly, the lightning flashed in the sky and a clap of thunder striked, a very heavy rain poured!!

Only one hour later the pond was full of water again. The great monk often miraculously passed away in this manner. Luang Phor doem's magic knives are often called the " god's knives " or " conquering knives". His knife carries comprehensive properties as an amulet for. Dispersing and conquering the ghost.

This item is in the category "Antiques\Asian Antiques\Southeast Asia\Amulets". The seller is "buddhasecret" and is located in this country: TH.