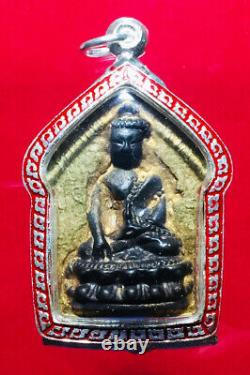 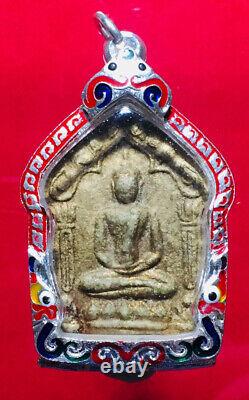 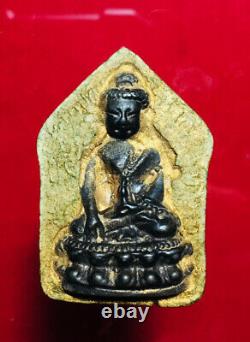 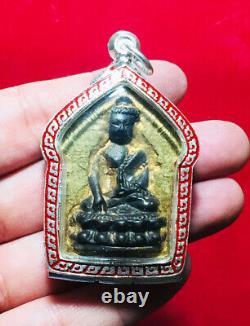 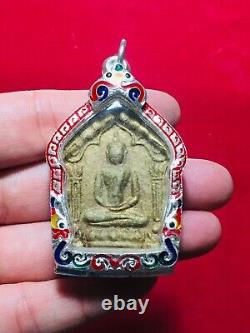 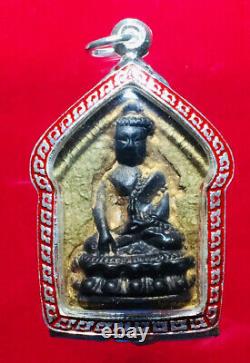 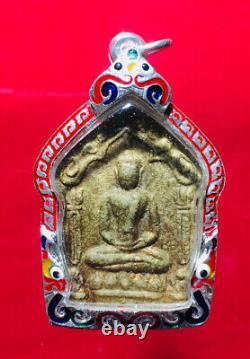 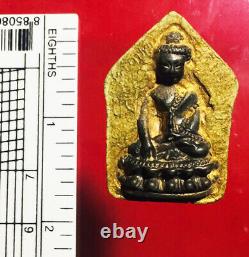 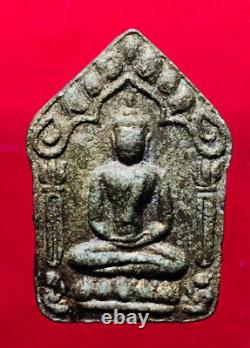 RARE PHRA KHUN PAEN INCLUDE PHRA KRING. MADE OF CLAY AND BLESS BY FAMOUS TAILMAN LP. TIM WAT RAHANRAI BE 2518. Story of Loung Phor Tim Wat lahanrai. Luang Phor Tim of Wat LahanLai used to create Phra Khun Paen Prai Guman powder followed very ancient ways, which only a few monks had the knowledge to create successfully. Kon Kulahp (the disciple of Luang Phor Tim) was instructed by Luang Phor Tim to find the corpse of a woman that died during pregnancy and the woman should have died on a Saturday and cremated on a Tuesday. He was further told that once such a cadaver was located that he should remove parts of the child's skull, from the unborn foetus and not look back once the sacred material had been secured.

This was carried out in accordance with the wishes of Luang Phor Tim. Luang Phor Tim chanted a special Katha for one week in order to prevent the spirit departing from the Prai Guman.

Once completed, Kon Kulahp was instructed to pound and grind the material into a fine powder, which he commenced to do, before becoming somewhat disturbed by sparks emanating from the mortar. He had to burn incense and ask for forgiveness before this phenomena abated. Luang Phor Tim took the Prai Guman powder and mixed it with a number of other sacred powders including, Itije powder, Patamang powder, Jindahmanee powder and 108 different herbs and sedges.

The mixture was chanted for days on end. The Pri Guman was also added to a few other batches of amulets including this Khun Paen, Phra Somdej, Phra Pitda and Phra Kring Chinabahnchorn. In the case of the Phra Kring amulet the material was added to the base. The Reason why Luang Phor Tim chose to use the skull of a dead child in the process was because the amulet made by Prai Guman will provide merit from Lord Buddha and the power and protection will come from Guman Plaai.

Khun Paen is a warrior living some 500 years ago in Ayutthaya Khun Paen is handsome and with a well-built body By his skilful fighting, he was appointed by the King to a high ranking military officer. Based on old legends, Khun Paen was handsome and very attractive to ladies. Khun Paen, with his excellent affinity with people, had attracted many ladies who were willing to marry him Khun Paen is a master in mantras or formulas with supernatural power. He used magic to make himself invulnerable and unseen to enemies, transforming his body into other forms, putting everyone else to sleep and converting sheaves of grass into invincible spirit warriors. Khun Paen also uses love formulas to captivate women and having the skills to ease anger.

Khun Paen was the first person who created Kuman Thong. Based on the legendary descriptions, Khun Paen was chanting some sacred mantras to activate his son spirit while burning the dead baby on the fire. Kuman Thong defended his father against enemies, evil spirits, gambling, cockfighting, and many more. Old Rare And Beautiful Desing.

Many Thanks For Visit Intersting And Support Us Oldsiam Stores. This item is in the category "Antiques\Asian Antiques\Southeast Asia\Amulets".

The seller is "buddhasecret" and is located in this country: TH. This item can be shipped worldwide.